The Coppa Italia winning Fiorentina Primavera takes on the Scudetto winning Roma Primavera for the Supercoppa.

It's the first outing for the "new look" Primavera. After a highly successful season which involved winning the Coppa Italia, reaching the finals in Viareggio, and the semi-finals for the scudetto, we return to face Roma tonight which who we defeated 3-1 in the Coppa Italia final at the Olympico.

The Primavera has had a turbulent summer of coaching changes and many of last season's stars are now on loan elsewhere. Carraro, Iemmello, Piccini, and Seculin have all moved to other pastures while we are introduced to new names like Campanharo, Rozzio, and Ashong. Buso was fired unceremoniously as well as was his successor. The team is now guided by ex Arrezzo and Pisa coach Leonardo Semplici.

The Roma team coached by Alberto De Rossi (father of Roma's Daniele) had a wildly successful year with reaching the finals of the Coppa Italia and winning the scudetto.

Tonight Fiorentina will show up in a 4-2-3-1 formation. New boy Lezzerinni will man the posts covered by Bittante, Rozzio, Ashong, and the returning Camporese. Safilu and Agyei will back up Campanharo who will support the trident of Acosty, Matos, and Babacar. On the bench is a host of new names including Bacci, Alan Empereur, Biondi, Panatti, Fossati and Jackson.

Roma will match Fiorentina's 4-2-3-1 with Pigliacelli in goal, Sabelli, Barba, Orchi, and Nego in defense, Verre and Viviani backing up Piscitella, Ciciretti, and Caprari supporting Tallo.

The match will be officiated by Fabbri of Ravenna. 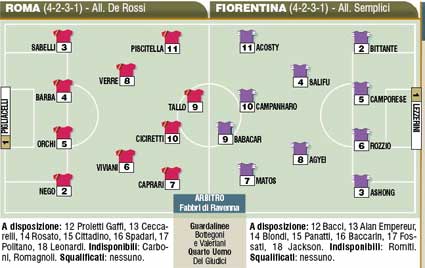 The main dangers will be Viviani and Tallo, both who have become well known names in the Primavera league. It'll be a good chance to see how our new look defense holds up.

It's a great chance to start our season off with a trophy. FORZA VIOLA!!