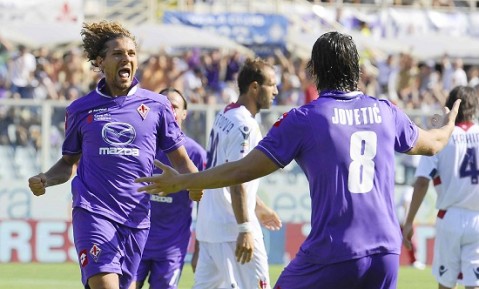 Jovetic and Cerci stepped up for Fiorentina as La Viola take all three points at the Franchi against Parma this evening.

Home cooking seemed to be just the thing for a team coming off a hard road loss, with a star injured and another in contract limbo as Fiorentina beat Parma 3-0 behind a brace for Stevan Jovetic and a goal for Alessio Cerci.

Recap
It's a little early in the season to be calling a match a must win, but with a tough away tilt against Napoli looming, Fiorentina fans had to feel that a full three points from the match tonight was necessary to avoid another slow start to the Serie A season and La Viola did not disappoint.

Bad streams kept me from seeing anything meaningful of the match, so I'll let the hi lights serve as a recap:

Report Cards
Again, as i didn't see the match, i can't really offer a report card.

Reports have no glaring mistakes and a generally solid match for Montolivo, a game effort for Silva, with a lot of effort, but needs work. Jovetic and Cerci stepped up to take the pressure for the missing Gilardino, and they'll have to continue to do that.

Looking Ahead
At Napoli, Saturday afternoon at 2:45pm eastern time. Milan is playing at the same time, so, of course, we're not on Fox Soccer Channel. Game will be shown on ESPN3.

Napoli is coming off a 1-0 loss at Chievo and have a match at home against Villareal three days after this match, so they will have lineup issues to deal with. It's likely former Viola Mario Santana gets his chance against his former team and we all know how alumnus fares against la Viola historically.