Dust Off and Get Back Up: Fiorentina-Parma

Share All sharing options for: Dust Off and Get Back Up: Fiorentina-Parma 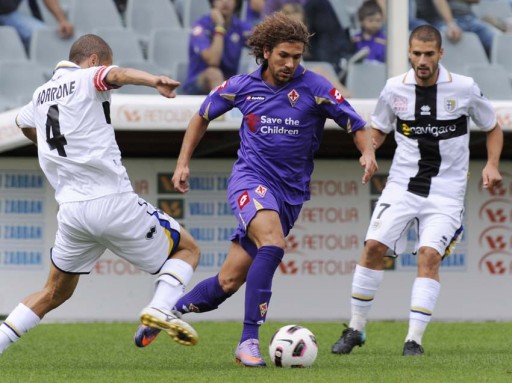 After a demoralizing loss at Udine, Fiorentina returns to the Franchi to face a lukewarm Parma side, the reaction should be a little like this. (apologize for the terrible model)

So once again Udine turns out to be a fortress. But I don't see Sunday's loss as an accurate representation of this team's weaknesses. We lost against a very determined side run by a very underrated manager in Guidolin. It's time to pick up and move on. We suffered some heavy hits in Udine, notably the loss of Gila, so the question is how does the team react with a muscle man in the form of Tanque Silva barging through defense? It's too early to tell what kind of game Tanque will play, but he is not a point man like Gila, he likes to be involved in the action from midfield forward. We will also see if Mihaj will pull off the supposed rotation and move JoJo to the bench in favor of Ljajic, and possibly introduce Romulo to the Franchi faithful.

After a day 1 slaughter against Juventus, Parma responded last week with a 2-1 win over Chievo on Sunday with a double from Giovinco (who's been their only scoring player in the campaign so far). However Giovinco also picked up a red card which means he will not be on his way to Florence.

Last season's match(es) against Parma yielded a 2-0 win at home with goals from LDS and Ljajic, while Parma infamously knocked us out of the Coppa Italia with a quick one two from Crespo.

The bad news in the injury department is Giladrino, Pasqual seems to have gotten over his slight knock, and Lazzari should be back in the starting lineup. The biggest question however is the Montolivo situation. At the latest, the Della Valles want to see him in the stands, and his game losing performance over the weekend have done nothing to endear him to a home crowd that will not receive him. However Mihajlovic has been steadfast on the situation, going as far as to announce "For me he is still a Fiorentina player as far as I know he will be at my disposal as long as he is match fit." Montolivo has also been getting support from the likes of Behrami and bff Pasqual.

With the exception of Gilardino and Montolivo, Mihaj looks set to confirm more or less the same 4-3-3 squad that faced Udinese. Pasqual Cassani will join Gamberini and Natali in front of Boruc but watch for Romulo at some point. Kharja will replace Montolivo with Behrami and probable Lazzari, who will be replaced with Munari if not yet match fit. Cerci will take his spot next to Tanque while Jovetic could be switched for Ljajic. Kroldrup is still out.

Parma come to the Franchi with a 4-4-2 consisting of Mirante in goal, held up by Rubin, Zaccardo, Lucarelli, and Paletta, midfield of Modesto Galloppa, Morrone, and Valiani will support Pelle and Floccari. Parma are only missing Giovinco through a red card.

The Tactical Key
We're more balanced than we were in Udine formation wise. Expect Silva to muscle his way through the defense but in a 4-4-2 the key is to break up the formation from the inside and open up plenty of space. If there is one thing Parma have always been good at at the Franchi, it's leaving miles of open territory. There shouldn't be a "10 men behind the ball" defensive game like we saw in Udine. The main dangers here are Floccari, Galloppa, and Zaccardo who are all very offensive minded. We're going to need more cover in the back, but the defensive wingers shouldn't feel obligated to be glued to the back line.

With Napoli on Saturday and Lazio the week after that, we need to pick up points for this game, or we could be in for a rough beginning to the season. FORZA VIOLA!!!