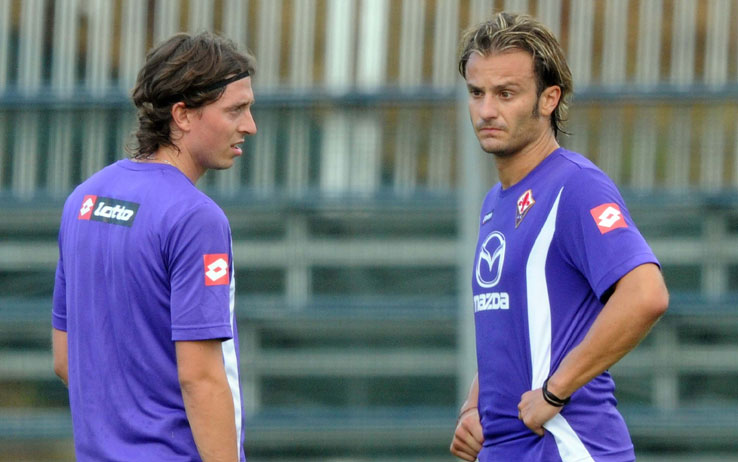 What a mess, this town's in tatters, I been shattered, my brains been battered, splattered all over... Firenze."

What started as a gloomy day in Udine turned into a complete horror show for Fiorentina fans as their team was clearly distracted by the Montolivo Situation, gave up two goals in the first 30 minutes, lost their striker Alberto Gilardino to an ugly knee injury that looked quite serious and rarely seemed to be able to string three passes together to save their souls.

Recap
The day started off with bad news, Andrea Lazzari, scheduled to start in place of Juan Manuel Vargas, was unable to go due to a fever. Houssine Kharja started in his place.

Bad streams kept me from actually seeing a lot of the match, but what I did see was a repeat of last season's road adventures. The team came out disjointed, not ready to play and gave up an early chance.

That early chance, combined with a questionable handball call on Gamberini (who got a yellow for it as well) turned into a goal as Christmas (Antonio Di Natale) converted the penalty kick.

La Viola spent the rest of the first 30 minutes trying to catch up. However, they once again left themselves wide open for the counter, resulting in the second goal.

The rest of the first half was spent with Fiorentina pressing ahead, trying to find a goal and Udinese, letting them come forward, always intercepting and starting the counter, for which La Viola was wide open, every time.

That actually describes the rest of the match, as Fiorentina led in possession 57% to 43% and yet, never really threatened.

Vargas came on at the one hour mark for Montolivo, who was whistled off the pitch by the home fans for his tackle from behind and from attending Viola fans because he sucks. Silva came on 8 minutes later for cerci, who had worked hard, but was inneffective and then disaster struck.

Alberto Gilardino was attacking the box when Udinese goalie Samir Handanovic came out on a challange and took his legs out from under him. Gilardino fell, twisting his knee in the process and had to be stretchered off the field, in tears. He's been taken to the hospital. Early reports (Xrays) suggest no bone damage, further tests to be done tomorrow (MRIs)

Munari came in for Alberto, but by then, all the air had left the match. it finished 2-0 and there really was nothing good to take from the afternoon.

Report Cards
Boruc - neither goal was his fault. had a few good saves to keep it at 2-0. fine 6

Gamberini - the yellow and the pk might have been harsh, but his team came out scattered and not ready to play. He's now the captain and it's up to him to make sure the heads are in the right place. The fact that he and Rikita are BFFs pisses me off too. 4
Natali - we got the same game from him that we get all the time. he wins some headers, but he's old and slow and usually over matched. saved a one on one play at the start of the 2nd with a timely tackle. 5
Pasqual - back to the Pasqual Il know and hate. for example, on one play he takes the ball all the way down the field, crosses it directly to a defending midfielder who breaks the other way, leaving him and the rest of the team in the dust and our defense in shambles and we only barely manage to get back. He spends far too much time thinking he's a striker. 5
Cassani - on the defensive side, I wish we had two of him, but he had a horrible day crossing. 5

Behrami - often seemed like he was the only one in the midfield. got his hand up in a face and got a yellow. 6
Kharja - really didn't look like he has gotten any work with the first team. hardly knew he was there 5
Montolivo - see below. -2; Vargas- got in half an hour, but didn't really make much difference. 5

Cerci - Started strong, served a great ball to Gilardino, who couldn't get it into the net but disappeared later and was subbed off. 5.5; Silva - Showed good energy, but he was out there alone. 6
Jovetic - Had an awful game. Couldn't pass dribble or shoot, but he kept trying long after the rest of the team had seemed to give up. 5.5
Gilardino - missed a shot from fairly close, fell down a lot and generally had no impact in the game until the injury. Hope to see him back soon. 5

Mihajlovic - we've seen this crap before. every freaking road game last year. Is Udi that good, i don't know, hell, I don' think so, we were just BAD. then there's the monto thing, I get that we were two players down, but he was clearly not there. 4

Riccardo Montolivo Situation
Riccardo Montolivo told management midweek that he is not committed to Fiorentina and that he "wanted to play for a more important team." Apparently he decided to start playing for other teams right away, as he was instrumental in the second goal.

That really was Rikita's best play of the day. he got a yellow card for tripping a player from behind, he consistently over hit the ball and his passes rarely found the mark. One wonders if he would've played had Vargas and Lazzari been healthy, and i would be very surprised to see him ever play in purple again.

Quick turnaround as Parma comes into the Franchi on Wednesday, coming off a 2-1 win at home against Chievo after a 4-1 drubbing by Juve to start the season. Silva will likely get his first start, Ljajic might see action for Jovetic, Another question in my mind is the status of Pasqual. A LDS sighting could be had. Giovinco had a double today, but got himself sent off, so he will not been seen Wednesday for the Gialloblù.