Black and White and Purple all Over Part 1/3: Udinese-Fiorentina

Share All sharing options for: Black and White and Purple all Over Part 1/3: Udinese-Fiorentina 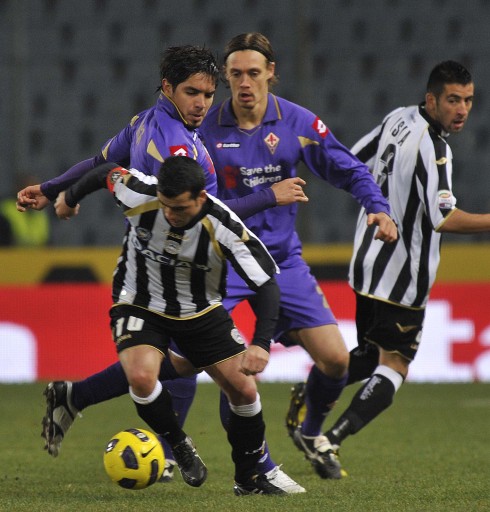 After a rousing 2-0 win over Bologna last week, Fiorentina face their first true test of the season as they face the hostile ground of the Friuli.

Udine like Siena has always been that place of uncertainty. We've won here once in the last five seasons, and the Friuli crowd add to a potentially rough ride. Udinese are a never-say-die team led by a talismatic Antonio Di Natale on a quest to become the first person to hold the capocannoniere crown three years in a row.

This doesn't mean all is lost however as Fiorentina are looking to pose a serious challenge of their own with Vargas re-entering the fray. Last season we went ahead with Santana only to feel the sting of Amero and Di Natale.

Udinese come into this match this week charged from a 2-0 win over Lecce last week courtesy of the ubiquitous Di Natale and Basta, and a 2-1 midweek win over Lille at the Friuli in the Europa Cup. There is still much to be seen how they will cope with the summer sell off of Sanchez, Inler, and Zapata. They started off their campaign with giving Arsenal a hard time. But truthfully it seems anybody can do that these days.

Udinese's new threat come in the form of young "Romanian Messi" Gabriel Torje, already looking to make a name of himself. Udinese will show up in a 3-5-1-1 formation with Handanovic in goal, a three man Benatia, Danilo, and Domizzi defense, Isla, Pinzi, Badu, and Ashamoah, behind Amero, who will support Torje and Di Natale. Coach Guidolin will do without Coda, Ferronetti, or Floro Flores.

Mihajlovic has confirmed the same formation that he faced Bologna with and has reiterated that Ljajic will start ahead of Jovetic when we face Parma or Napoli. Miha is also considering Montolivo to be an extra arm for now despite the breakdown of his contract talks and his desire to leave the team. We're showing up with our 4-3-3 consisting Boruc in goal, Cassani and Pasqual supporting Gamberini and Natali, and Behrami, Montolivo, and Lazzari supporting Cerci, Jovetic, and Gila. Vargas will start from the bench as he trained apart this week, but expect a second half appearance. On reserve we also have Neto, De Silvestri, Kharja, Nastasic, Ljajic, and Silva. Kroldrup and Gulan are out for this one. 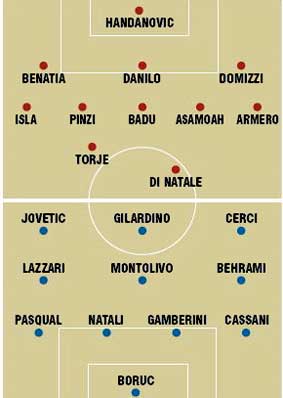 The Tactical Key
Udinese's specialty is the counter-attack. They allow a team to get deep into their half until they lose possession and storm the other goal. The key matchups are going to be the midfield not only giving service to the trio up front but also being a physical barrier against the likes of Torje and Di Natale. The one to keep an eye out for is Montolivo vs Pinzi who will have to concentrate on dispossession (and in Montolivo's case not losing the ball himself) Since Guidolin is setting a 5 man midfield against a 3 man, the extra weight is going to fall upon Cassani and Pasqual to neutralize any threats on the wings. It's possible Pasqual might be reduced to a defensive role this week rather then the openly offensive route he took against Bologna. Cerci and Jovetic are going to have to play a more physical game and keep open space for Gilardino. We'll have to strike deep inside the Udinese midfield to break them up.

Udine is a tough town, but with a little physical toughness we can come away from this with points. FORZA VIOLA!!!