Share All sharing options for: Fiorentina-Citadella 2-1: Who Are You??? 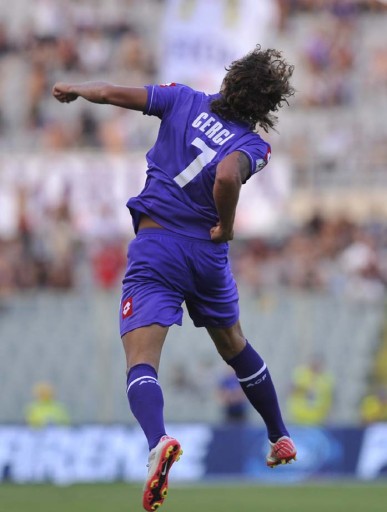 Fiorentina advance in the Coppa Italia thanks to Gila and Florence's favorite manic depressive Alessio Cerci.

Fiorentina came into this match welcoming back Jovetic to his first competitive game and set him in a trident with Gila and Cerci. Fiorentina were on the attack from the first minute when Cerci set a ball just under Gila that was snuffed by mere inches. Cerci himself fired on goal in the 5th minute earning a corner. Fiorentina were suffering defensively especially from the duo of Di Carmine and Bellazzini. Yet only minutes later, Montolivo filtered a ball to Behrami who slotted for Lazzari. Lazzari flicked the ball over to Gila who in an excellent one two touch slotted the ball into the far post. 1-0 viola. Unfortunately the purple dominance did not last long after as Citadella took the game in their own court creating chances from a dicey and half sleeping defense. In the 30th minute, JoJo weasled his way into the small area and pounded a ball into the inside post that was knocked out. At 36 minutes a lighting Citadella attack found an unmarked Di Carmine who knocked one past Boruc for the 1-1. The last few minutes of the first half are a varied amount of shots from Gila, Behrami, and JoJo, who becomes generous and prefers leaving the shooting to Cerci.

Fiorentina come roaring out in the second half. Cerci cuts in from the right side and from the border of the area slams one into the upper left corner for the 2-1. Its a magnificent goal from a player who is still very much an enigma to this team. In the second half JoJo and Cerci take control of the attack and put pressure on the Citadella defense. The white northerners are only saved by a vigilant goalkeeper. A heavily whistled and jeered Montolivo is subbed with Kharja in his purple debut. Kharja launches Cerci into a counterattack nearly resulting in a double, while JoJo, finding himself surrounded by defenders, unleashes his inner hulk and tears his shirt. JoJo is subbed with Ljajic who's claim to fame is taking yet another page from the Kuzmanovic school of shooting. The game ends with one more Fiorentina counterattack and a 2-1 win which launches the viola in the Tuscan derby vs Empoli who defeated Sampdoria.

Boruc 6 - Good timing, good reactions, but was staring into space with Di Carmines goal.
De Silvestri 6 - Good offensively but possibly needs to cover his own position more.
Natali 5 - Fell asleep while marking Bellazzini who's cross led to the goal.
Gamberini 6 - Aggressive play, pushes everyone forward, but outplayed by Di Carmine.
Pasqual 6 - Moves forward nicely, and seems to know how to set crosses again.
Behrami 6.5 - Hes the gladiator in midfield...and defense...and forward...actually at one point i'm sure he was coaching, goalkeeping, and buying players at the same time. Does anybody know what he actually does?
Montolivo 5 - We're back to Montolivo in "Florence" mode, rather than "Spain" mode. He's got to have an interchangeable evil twin we don't know about.
Kharja 6 - Enters in the game and immediately launches a counter attack. Encouraging signs.
Lazzari 6.5 - Quick reaction in launching Gilardino, held the midfield together extremely well. Looks really good paired with Behrami.
Cerci 7 - It's becoming more apparent selling him would have been a mistake. He's whiny as hell but he plays...hard. Its obvious he hasn't lost his gas from last season and he displays flairs with powerful shots, quick entrances into the area, and a hell of a goal. I'm actually looking forward to this one.
Gilardino 6.5 - Gila has been one of the positives of the summer, and his goal with a quick control and smooth slotting has classic Gila posted all over it. We need him...at least one more year.
Jovetic 6 - He hasn't played in a year and it shows, but for what hes relearning, he hits the post, he still has his slick runs into the area, he just needs to regain that confidence and composure in the moment that he needs to shoot. Mihaj is right, it'll be at least October when we'll see "the real Jovetic"

Mihajlovic 6.5 - This Fiorentina comes out with a little more bite, a little more aggressive, but that hole in defense is still a problem, and the back 4 need to be more alert. 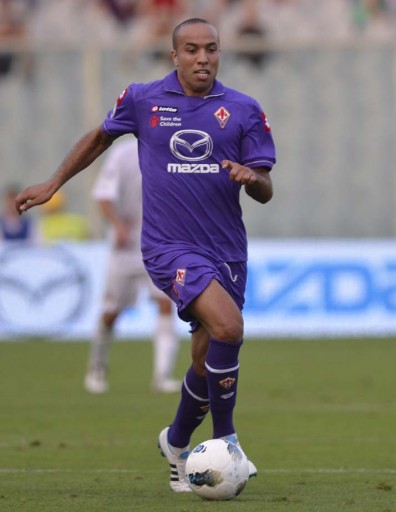 So what have we learned from this match?

1 - Cerci, despite all his off field issues, is one of the most consistent players on the team. His end of season form from last season has clearly carried over and he might end up making a big impact on the season.

2 - We need Gila. We're not going to find a quality forward this late in the transfer market unless we can magically poach Maxi Lopez or Marco Borriello.

3 - Don't be harsh on JoJo, he still needs to get the dynamic of the team. It'll be like his first season all over again.

Next up: double Tuscan header with Siena and Coppa Italia vs Empoli