A Day In Fiorentina's Summer Training

Share All sharing options for: A Day In Fiorentina's Summer Training 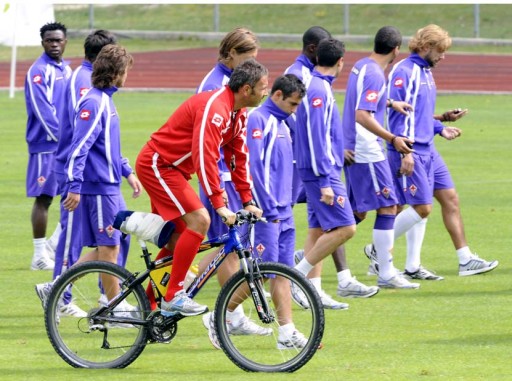 The following is simply for fun, any references towards other teams are purely satirical

A Day in Fiorentinas summer training:

6:00 AM The team wakes up, Sandro Mencucci rises out his coffin to "Flight of the Valkyries", Corvino is raised via forklift.

6:30 AM The team arrives at the training ground, Gilardino tries to park his car but misses the parking space by 4 meters, Boruc's monster truck crushes De Silvestri's SMART Car.

7:00 AM Security is called to remove a man trying to enter the grounds. It turns out to be Papa Waigo who nobody seems to remember still plays for the team.

7:05 AM Comotto arrives at the ground but accidently stabs himself with his keys while locking his car. Doctors tell him he'll miss half the season.

7:30 AM The training begins, Mihajlovic starts with some light stretching...whilst standing barefoot on shards of glass lit on fire.

7:50 AM Vargas and Jovetic have a shooting contest. Jovetic launches the ball into the top corner while in a handstand and whistling "Single Ladies". Vargas chips the ball just under the bar.....at the San Siro.

8:00 AM Andrea Della Valle arrives to supervise the training, as he walks into the grounds, Felipe tells him his fly is down. Della Valle immediately calls a press conference to announce he's resigning because he can't stand the insults.

8:15 AM Corvino receives a call from Beppe Marotta, Beppe says hes trying to get rid of this Brazilian called "Melipe Felo". Corvino shuts the phone.

8:50 AM Cassano drives into Florence, Florence explodes, launches fireworks, and holds a parade. Turns out he was only stopping for gas.

9:15 AM Security is called because a man in a goalkeeper jersey keeps insisting it was his destiny to wear purple and he must play.

9:20 AM Emiliano Viviano is escorted off the premises.

9:45 AM Cassano drives back into Florence, church bells ring, the sun shines bright, and women offer themselves at his feet. Turns out he left his sunglasses at the gas station.

10:20 AM Diego Della Valle arrives to watch the training, as he's walking, Gamberini points and tells him his shoe is untied. He holds a press conference immediately to announce he's selling the team because he will not take any more criticism.

11:00 AM Jovetic goes to the hairdresser, after 3 hours Miha calls to find out why he hasn't come back to training, he tells him that his hairdresser can't seem to find where his hair begins.

11:30 AM Avramov goes up to Frey and asks him for an autograph. Avramov says he wants to be like him when he grows up. Frey walks off...laughing manically.

12:45 PM Feeling remorseful, Diego and Andrea Della Valle go to group therapy, they walk into the room to find Alessio Cerci rocking and weeping in a fetal position.

1:30 PM Montolivo arrives on the ground. As he walks towards the pitch he passes security escorting out the 12 year old girl everybody thought was him.

1:45 PM Mihajlovic gets the group into some running exercises, he releases a pack of lions and rabid dogs on the group.

2:00 PM Corvino pens a letter of condolences to Felipe's family.

2:50 PM Mencucci is called to the front of the stadium because a paper bag has been set on fire. As he stomps the bag and realizes the dog poop on his shoes, he catches a glimpse of D'Agostino laughing and running back into the bush.

3:00 PM Mihajlovic decides to have the goalkeepers train, hanging upside down over boiling vats of oil.

3:30 PM Gilardino accidently hits the newly reformed Cerci with the ball despite standing half a meter from the net. Cerci bursts into tears and swears things like this never happen in Manchester.

4:00 PM Mario Balotelli randomly shows up and pegs him with a dart.

4:30 PM Jovetic returns to the training but can't understand why someone is walking around the Franchi dressed as "The Thing"

4:31 PM Adem Ljajic can't understand why Jovetic didn't say hi to him as he walked by.

4:50 PM Montolivo and Gilardino want to have a shooting contest like Vargas and Jojo. Montolivo breaks the mirror off Frey's Porsche, Gila shoots the ball into the bar and knocks himself out.

5:00 PM Pasqual shows up to training accompanied by his psychologist.

5:15 PM Babacar tries to dribble around Kroldrup, Kroldrup stands still and the ball flys off his face and hits Corvino, Corvino drops his cell phone, the deal for the 4th Serbian wonderchild is broken.

6:00 PM The training ends, everybody starts to leave the grounds, Boruc is seen walking off wearing De Silvestri's shirt.

6:30 PM Security is called because a car has slammed into the wall. They find Gilardino lamenting missing the exit gate by 4 meters.

7:00 PM The team goes out to dinner. As they walk by the Ponte Vecchio they find Pasqual standing on the roof dressed in drag and screaming "What do I have to do to make you like me?" Jovetic is able to coax him down.

8:00 PM Tired from the day Gilardino walks into his house, changes into his nightclothes, brushes his teeth, and then jumps into bed...he lands on the ground 3 meters from the bed.