Share All sharing options for: We're Not Done Yet: Fiorentina-Varese Primavera Preview 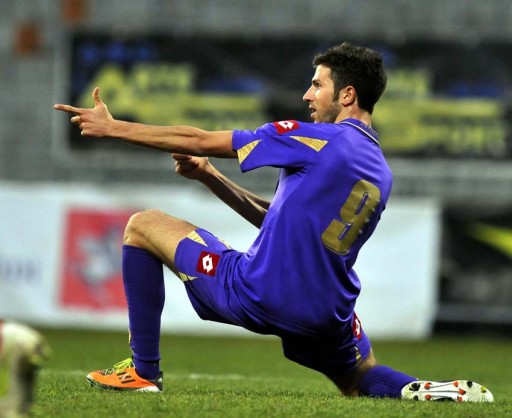 The Buso Boys take on Varese in the match that gives a ticket to the final against Roma.

Tomorrow Iemmello (pictured) and the Primavera will face Varese in the neutral pitch of Pistoia in a one match semi-final which will face Roma in the final for the scudetto.

The Coppa Italia winning team, fresh off a 7-6 penalty win over Atalanta in the quarterfinals will face a strong Varese side which has hosted one of the strongest youth squads in the league. We beat Varese earlier in the season in the semifinal of the Viareggio Cup, 2-1 with goals from Carraro and Iemmello.

The Buso Boys played an excellent 3-3 draw with Atalanta, conceding in the 119th minute to a draw and then winning on penalties where Seculin was the nights hero. But lauds must be made to Acosty for a fine performance and Camporese, despite his red card, for showing a leadership role and notching another goal.

Varese got to the final by humiliating Juventus 5-1.

Unfortunately Buso has to rebuild his team as injuries and suspensions take a toll. Camporese and Buso himself are suspended a match, and Safilu picked up a knock and will be replaced by Agyei. Matos Ryder returns to the attack after a suspension, and Camporese will be replaced by Fatticioni, Biondi, or Masi. Seculin will be in goal backed up by a makeshift defense anchored by Piccini, and Agyei and Acosty will back up Carraro and Iemmello in attack.

This is our chance to make history.