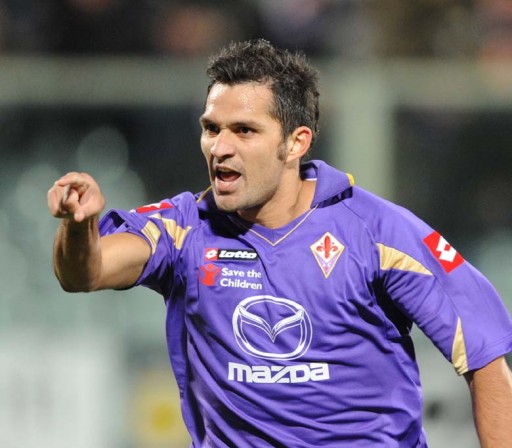 Mario Santana has always been a bit of a mystery of a player. Caught between injuries hes a player who had so much potential and so little time to show it. Unfortunately the best came at the very end but he was a dependable player who could dazzle with moments of brilliance.

Santana joined Fiorentina from Palermo on May 27, 2006 for 5 million euros. He was the response to Prandelli's call for a dependable and flexible winger. Mario started off perfectly with a goal in his first match, a Coppa Italia match against Giarre. Unfortunately he also suffered a injury to his femur which constrained him to the stands for many months.

On his return to the field he was immediately given a starting place and scored a goal against Reggina on his first match back in action but subsequently injured again in a match against Torino. Because of his injuries he finished the 2006-2007 season with 8 appearances and 1 goal.

Like the subsequent season he found his form in 2007-2008 season where he scored his first double on his birthday against Cagliari, and was renown for scoring the winning penalty against Everton in the Coppa Uefa which allowed Fiorentina into the quarterfinals and scoring the goal against Parma that launched Fiorentina's comeback to overtake Milan for 4th place.

He finished the season with 26 presences and 6 goals.

In the 2008-2009 season Santana was moved behind the two points in Prandelli's new 4-3-1-2 formation and scored the comeback goal against Napoli. But in a match against Bologna Santana once again suffered a serious injury which prematurely ended his season

In the 2009-2010 season we saw Santana reduced to a support player than a natural goalscorer as Vargas moved into his place, yet he developed into a natural crosser and even a decent free kick taker.

Santana put pressure in the Champions League with a superb attempt against Lyon resulting in hitting the post and a goal in Budapest against Debrecen.

In the league Santana scored goals against Siena, and a splendid backheel effort against Genoa.

Santana finished the year with 26 appearances and 3 goals.

Unfortunately injury struck again in a friendly with San Miniato and Santana had to face surgery.

In his final season, we saw a slimmer, faster, harder working SuperMario than ever before. Santana became crucial in moving the team forward with slick performances, goals against Udinese, Genoa, and Bologna, and nearly the hero of Coppa Italia in a late goal against Parma cancelled out by Crespo. Once again Santana was hot property.

Unfortunately his contract was up and negotiations came to a halt as Mario decided to move on. A player wrecked by injury but still gave us joy in some of our most crucial moments.

"I'm sad to leave Florence, I spent the best days of my career here, and surely this is the city where I will continue to raise my family. I've never felt better anywhere else than I did here. Thank you to the Della Valles, Corvino, and especially the fans." - Mario Santana