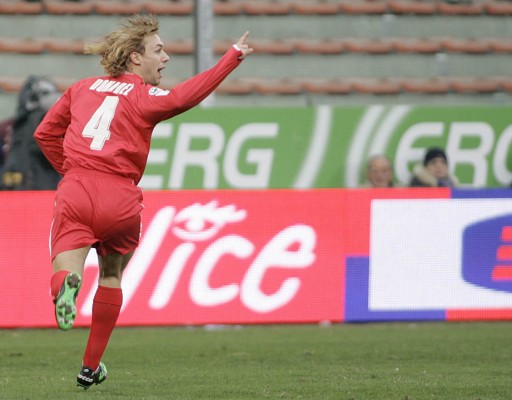 Marco Donadel's time in Florence has come to an end. This is a tribute to a sometimes frustrating but ultimately loyal player who shared some of the greatest moments of the last 5 years.

Marco Donadel joined the team in Janurary 2005 on loan from Sampdoria, at the height of the Dino Zoff era, when Fiorentina were floundering in the bottom depths of the table all season. Immediately he imposed himself as a durable defensive midfielder and his positive season earned Fiorentina to purchase him for 1.5 million in summer 2005. He immediately became a staple of the Prandelli midfield, he could control the game and direct passes and flow from just above the back line. Marcos positive season in Florence was capped off with his first goal against Udinese at the Franchi, and immediately he became a prized midfielder.

Donadel's positive streak went well into the 2006-2007 season, up until January where he sustained a season ending injury. But it was the 2007-2008 season where Marco showed his considerable skill. He started off in Prandelli's classic 4 man midfield and still positioned slightly farther than the others, but as the lines began to open up, we saw a part of Donadel which would become his inevitable trademark. His shot. Marco became known for his swooping yet powerful long range shots, becoming deadly accurate. It started with Sampdoria.

And in the Coppa UEFA against Elfsborg

Marco ended the season with 2 goals in Serie A and one in Europe. But the Viola bosses and Corvino were looking in different directions, and Marcos position was threatened by the arrival of Felipe Melo.

In 2008-2009 Donadel was regulated to the bench and the burly Brazilian seemed to take over a majority of the glory in the viola midfield. Still Marco never raised his voice towards the superiors, we never heard groaning or threats of walking out. Marco took the position with grace and he delivered when he was called upon.

2009-2010 saw Marco back to his regular position, albeit with extra coverage from Zanetti, and time sitting on the bench took a toll on his performances. Widely expected to be gone in the summer he was reconfirmed for one more season.

In the past season, Marco came back swinging against his critics, he scored his first goal in over three years.

And when Montolivo was injured he took over the captains armband and actually held the air that a captain should show, leading the team with tough inspiring performances.

Marcos time at the Franchi has come to an end but the blond midfielder has shown to be a tough and hard to replace leader and player. We at the Fiorentina Offside wish Marco the best, and Forza Viola always.

"I want to thank Corvino, the fans, and Andrea Della Valle for my adventure in Florence, it's a beautiful city and it'll always remain in my heart. I am forever a Fiorentina fan." - Marco Donadel