Share All sharing options for: Brescia 2-2 Fiorentina; It's the End of The World... 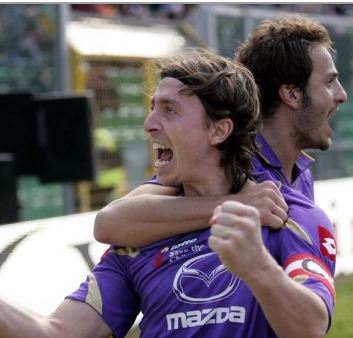 The Serie A season stumbled to an end for La Viola today at relegated Brescia much as it had all season as Fiorentina notched up their 15th tie, securing 9th place with 51 points, 4 points and 2 places better than last season.

Fiorentina's two goals were from Juan Manual Vargas, with his fourth goal of the year in the second minute and from, perhaps, the only man extremely sad to see the year ending, Allessio Cerci, who put a seventh notch on his gun at the seventy-fifth minute.

The end of the season, in Rapture-like fashion, leaves several uniforms empty, as players move Onward and all that remains for fans is to see which ones stay and whom, if anyone, is brought on to replace them. Gone, seemingly for sure, is Vlada Avramov, Marco Marchionni, Gianluca Comotto, Marco Donadel and Mario Santana. It remains to be seen if Riccardo Montolivo remains in purple.

I didn't get to see most of the match due to mostly non-existent streams, so I'll have to pass on the report cards for this week. We will probably have a season recap of some sort at some point and we still have the Primavera in two weeks and of course, the Mercato.

In Corvino We Trust.