Share All sharing options for: Fior 1-1 Bologna; So What 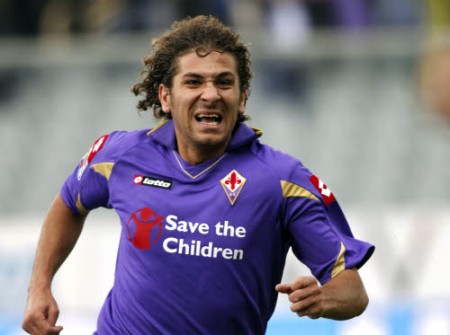 It was a tale of two halves today in rainy Firenze. Fiorentina dominant and flying in the first half with Alessio Cerci scoring his fifth goal in four games and the second half with Bologna attacking, equalizing and gaining a man advantage when Per Kroldrup wound up one on one with Marco Di Vaio and took him down.

Luckily for Fiorentina, Bologna seemed content with the tie and sat back and even had their own man sent off. Fiorentina were unable to break through and the game finished 1-1. Viola fans left in the stadium, which was only half full at best at the start of the match, whistled their team off the field, while the few Bologna fans allowed to attend cheered their team heartily, as the Rossoblu have insured participation in Serie A next season with the single point.

Recap
The match started off in a rough and tumble style, Riccardo Montolivo being taken down hard, got up and got in the face of Federico Casarini and by the fifth minute, Bologna were issued a yellow card (Miguel Britos).

Fiorentina shook off the rough play and dictated the temp the rest of the match until the surprise of the spring, Cerci, notched another goal at minute 20 with a header off a Vargas cross.

Alberto Gilardino had a chance one on one on Emiliano Viviano, but scuffed the shot wide and shortly thereafter had to be subbed off. Mario Alberto Santana came on to the cheers of the Florentine Faithful that bothered to show up. It appears sadly, that it's the last time we will see Mr Santana on the Franchi pitch in purple.

Right before halftime, Della Rocca got a shot on that returning goalie Sebastian Frey made a sprawling one handed save on, saving the lead for the time being.

Momentum shifted 180 degrees at halftime as Bologna came out loaded for bear and Fiorentina seemed asleep. Gaston Ramirez, subbed on for Vangelis Moras at the half, teamed up with Di Vaio and exposed a slow defense and scored within 5 minutes and only 4 minutes later, La Viola got caught upfield and Per Kroldrup was left one on one with Di Vaio and wound up dragging him down in the box. Di Vaio missed the penalty, but Fiorentina were forced to play a man down and were never dangerous again.

The rest of the half was fairly boring and frustrating affair for those with purple glasses on, even after goal scorer Ramirez got a yellow and then a second for dissent and was sent off.

Report Cards
Frey - good to see him back, made a fantastic vintage save. had no chance on the one given up. 6

Di Silvestri - spent the whole fricken match in the front half of the field. no where to be seen when Kroldrup gets the red or on the goal, it wouldn't be all that bad if he were any good up front, but he's not 4
Pasqual - same argument, up front all match. vargas constantly having to play back to cover. no real good results from his forward play. why do we sacrifice vargas for this guy. 4; subbed for Ljajic as Mihaj struggled for offense.
Gamberini - looked good, had to cover for other absent players all match and managed it 6
Kroldrup - nowhere to be found on the goal and let Di Vaio just walk around him and drug him down for good measure. ejected and dejected 4

Behrami - always solid, should be a fixture at his position next season 6
Montolivo - really didn't have much of a standout match, even in the first half, no glaring errors either however. 5.5
Vargas - came forward a few times and got the cross on the lone Viola goal. really a pity that he has to be sacrificed for Pasqual's deficiencies 7
Ljajic- not really a factor. he was a Lost Boy this season, I'm afraid

Gilardino - scruffed a shot halfway thru the first half and had to be subbed off with a calf injury. remains to be seen if this is his last appearance in purple. 5 Santana - Came and and played his usual match, never really dangerous tho, likely his last game at the Franchi. 6
Mutu - has never seemed to hook up well with his teammates or get his deadly free kick shot back, but he works hard and wins free kicks. 6
Cerci - man of the match again. had to be subbed for Natali to replace Kroldrup 7.5

Mihajlovic - great first half, but I'm really tired of seeing this squad come out after a good first half and crap on their shoes in the second. Apparently this is not a man that inspires the bulk of the players on this squad. Now, that being said, a lot of the players that he apparently doesn't inspire look to be gone next season, reportedly, so maybe this summer he makes this squad his own. I hope so, otherwise this squad might have 20 at the winter break next season. 5

The Bright Side
Again, the bright side is our youth. Fiorentina Primavera qualify for the Final Eight tournament by beating Catania 3-1

Looking Ahead
one last match at Brescia. The Primavera players will be available, should Mihajlovic wish to play them. With Genoa just two points behind and playing Cesena in Genoa next week, Fiorentina will likely need three points to keep 9th place.