Share All sharing options for: FIOR 5-2 UDI; The Kid Is Hot Tonight 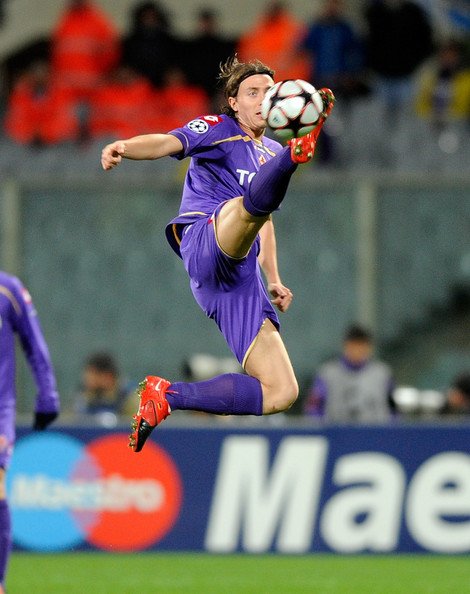 But where will he be tomorrow?

Lots of things went on tonight at the Franchi between Fiorentina and Udinese in an important match for both squads, Udinese fighting for the last Champion's League spot and La Viola struggling to somehow defy the odds and get an Europa League slot. A brace for Allessio Cerci, a goal and a shot that deflected off a defender for an officially ruled own goal by Gaetano D'agostino and a wonder-goal for Peruvian Warrior Juan Manuel Vargas among them, but what really stood out for Yours Truly tonight was a return to form of Il Capitano, Ricardo Montolivo.

Montolivo didn't get a goal, or even an assist, although his drive into the box led directly to the second goal, but he kept the ball in the attacking half any number of times and stood up strong in the midfield. It seemed that, although the announced formation had him playing on the left side of D'agostino, that he moved forward and more central, almost directly in front of D'ago, which seemed to stretch the Udinese middle and favored La Viola most of the match.

The strong performance comes amid a multitude of rumors and stories about where Monto will be playing next year, and, frankly, your guess is as good as mine, at this point.

Certainly it must be noted that Montolivo's return to form could have been aided by the return of D'agostino and the sudden resurrection of Cerci, who's seemingly channeled his inner Messi and scored four goals in two matches (and somewhere behind the spotlights Pantaleo Corvino smiles a little "I told you so" smile).

Recap
The game started lively, Artur Boruc called on to make a save in the second minute, but Fiorentina stormed back strong. In the 7th minute, Cerci, drove along the baseline, cut back with a superb move and turned the ankle of his defender, Andrea Coda. Coda had to be replaced and two minutes later, while Udi was still getting organized, Cerci drove that side again, lobbed a long ball to Vargas, who somehow swung around it and got it in the net.

After a save on a straight shot by Boruc and a few missed shots, Fiorentina struck again, as Montolivo drove the box, served a ball to Behrami, who mishit it, but D'agostino was there to pounce on it

Eight minutes later, Udinese answered back with a wonder goal of their own from Pinzi off of a horror clearance header from Gamberini

Fiorentina had two more chances to score before the half, with Gilardino heading a ball just wide and Cerci firing a laser that Udi goalie Handanovic made a sprawling save on, but the sides went to half 2-1.

Six minutes into the second half, D'agostino fired a shot that deflected off of Zapata into goal

But six minutes later, Assamoah got one back for Udi

It took another 20 minutes, but Alessio Cerci's hard work finally paid off on a great ball from Behrami

After fifteen minutes and 4 missed shots for Udi, Cerci sealed the deal, assisted by Marchioni, who had come in for a tired Vargas

Report Cards
Boruc - Wasn't at fault for either goal and made some good saves, solid as always. 6.5

Gamberini - horrible clearance on the first goal, but made up for it later on Assamoah. good game 6
Kroldrup - wasn't around for teh second goal, but other than that fairly solid. 6
Pasqual - been playing better of late. couple of good crosses. 6
LDS - got too far ahead a few times early, but managed to lumber back in time and played well later. 6

Behrami - almost scored, hardest worker on the field. 6.5
D'agostino - solid defensively in the first half, got the goal and caused the own goal, seemed to free up monto a lot to create downfield. 7.5
Montolivo - his drive lead to the 2nd goal, he possessed the ball in the attacking zone and kept the team pressing forward. As capt he gets some credit for the great team spirit today. 7.5

Cerci - Not sure what he's sprinkling on his breakfast cake, but he's turned it around. comeback player of the year for us
7.5
Gila - I made the comment during gametime that Gialrdino was already on the beach, maybe he's home with his new child, I don't know, but he missed chance after chance. Maybe he's tanking it so no one else wants him? 5
Vargas - typical animal first half, but you could see him tire in the second. subbed off. 7

Subs
Marchionni - came in for a tired Vargas and got an assist and helped kill off the match 6
Gulan and Natali - tactical time wasting subs,

Mihajlovic - Made the tactical change right before game time that made the difference, bringing in D'agostino and moving Vargas forward. Recognized Vargas was tired and got him out. like him or not, the team is starting to show what they can do down the stretch. 7

Sunday Morning, 9am EDT in Milan at the San Siro against Inter, we really have nothing to lose and should we play like we did today, we can beat Johonna's lads.