Cesena 2-2 Fior; Can't Get No Satisfaction

Share All sharing options for: Cesena 2-2 Fior; Can't Get No Satisfaction 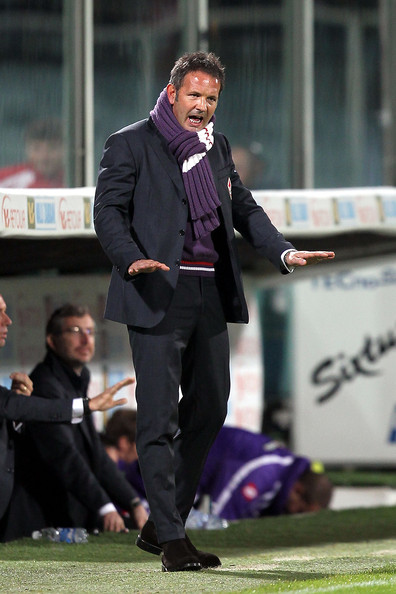 Sinisa looked hot under the collar as he refused to take off his "lucky" scarf in 70 degree Cesena and once again, Fiorentina did not lose, but they did not win either, and with matches upcoming against Milan and Juve, the two points lost may loom large.

Getting behind early again, tying the match, taking the lead, hitting the crossbar instead of extending the lead and then giving up the lead due to lazy sloppy play is what Fiorentina fans got today. A point is a point, and we shall take what we can get, but i fear we will look back and wish we had all three points from this one.

Fiorentina extend their unbeaten streak to 6 matches, with the last loss being against Inter, increase their point total to 42, one back of Palermo for eighth place.

Recap
It was a very disjointed affair, with referree Gava calling 33 fouls and issuing 4 yellows, one of which was on Adrian Mutu at the 13th minute, this will keep Mutu from playing against Milan next week.

It didn't get much better as Gamberini took down Parolo right outside the box in the 18th minute, setting up a free kick by Former Viola Jimenez that Artur Boruc never even saw go by him for the early goal.

The match went back and forth until minute 35, when Juan Manuel Vargas fought off a tackle on the left wing and served a perfect ball to Gilardino who headed it for the equalizer.

First half ended with the sides equal at 1.

The Viola midfield really felt the absence of Valon Behrami as Marco Donadel struggled as did Ricardo Montolivo, at least until the 69th minute, when a back pass from Mario Santana saw him open and Monto did not make a mistake. 2-1 Viola.

Two questionable (at least by yours truly) substitutions followed as Marco Marchionni came on for Santana and D'agostino came on for Vargas and my fears came true as a lazy pass by Mutu was stolen by Cesena and converted off of a Gamberini deflection.

Report Cards
Boruc - wasn't even there on goal 1, wasn't really his fault on goal two and saved the one pt near the end of the match, seemed distracted, probably thinking about Frey. 6

LDS - wasn't outstanding, but he was serviceable and showed better speed on retreat 5.5
Pasqual - Jimenez ran around him like he was standing still a few times, vargas has to sit way back to babysit for him, but he was serviceable as well. 5.5
Gamberini - clumsy match, gave up the foul on the first goal and the deflection on the second. 5
Natali - almost scored, wins lots of headers, was probably our best defender today. 6

Donadel - yuck. can't hold the ball, can't win the ball, is good for three or four stupid fouls, 5
Montolivo - had a shitty day except for the goal, 3rd match in 9 days, prob tired 6
Vargas - most dangerous man on the pitch, even with having to play back to cover for pasqual. 7

Mutu - looked tired after his return from Romanian duty , got his elbow up for a soft yellow, gave up the equalizer on a lazy pass 5
Gila - Dedicated his goal to his new daughter, Gemma 6
Santana - assist on monto's goal, typical hard working effort 6

Mihaj - didn't like his subs, didn't like the way the team came out and gave up an early goal, did like the way they fought back, but once they gave up the 2nd goal it was over. not the first time this team has been left needing a goal with a defense lineup on the field. 4 (not looking forward to another season of this guy, way too conservative)

Looking Ahead
Milan at the Franchi on Sunday Afternoon with no Mutu and no Behrami. Milan coming off a drubbing of Inter and will have their magic man Ibracadabra back.