Share All sharing options for: Fior 1-2 Milan; I'm Just Waitin' On A Friend... 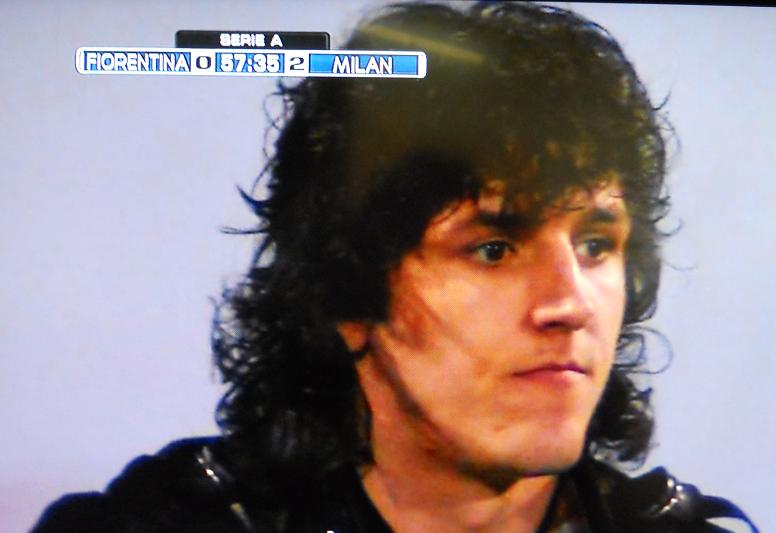 I could talk about the hugeness of the Stage that Fiorentina found themselves upon this evening, in the late match, with all the Peninsula watching, in front of a packed Stadio Artemio Franchi, including young Stevan Jovetic, against the best team in the league so far, who are arguably playing their best calcio at the moment.

I could talk about the pathetic-ness and futility of playing the best team in the league with a starting lineup containing the names Donadel, Natali, Comotto and Pasqual. I could talk about the complete Milanese domination of the Viola midfield and the disappearance of one Ricardo Montolivoi too.

I might mention that Adem Ljajic really couldn't make up for a missing Adrian Mutu, but that Khouma Babacar came on and injected new life into a stagnant Fiorentina attack or how the Return of the Sixth Best Defender in Serie A last season settled down the defense or how Valon Behrami coming on the last half hour seemed to be the final piece to the puzzle, freeing up Montolivo to get a shot that wound up as a Juan Manuel Vargas goal too.

I might talk about the predictable controversy, the calls of Mr Morganti, Milan down to ten men and whether Comotto and Gilardino were pulled down in the box. I could even talk about the deplorable condition of Italian officiating and calcio overall, with 47 yellow and 5 red cards being issued on this, the 32rd match day.

Fiorentina sit in tenth place, despite Max Patrick and Fox Sports stating otherwise repeatedly(they failed to account for Bologna's three point deduction), being 11 pts behind 6th place, with four teams to pass and 9 pts behind 7th place (in case Palermo falter in their Coppa bid) and with visits for Juventus and Udinese and a trip to Inter still to go, it seems that any European dream is and was a pipe dream, at best.

That being said, perhaps now the focus can go to reintegrating Sebastian Frey and Jojo into the squad, and getting some of the youngsters off the bench. During the summer you can sell Artur Boruc to the EPL for stupid money and get some damn defenders.

It only took 7 and a half minutes until Gianluca Comotto lost track of Clarence Seedorf, cleared the ball badly and lost track of Seedorf again and Pato fed the ball perfectly and Artur Boruc had no chance.

WARNING: The following highight and the ensuing celebration may be uncomfortable for homophobic people to watch. Please use discretion, if necessary.

After subbing on Babacar for Ljajic, Kroldrop for Natali and Behrami for Donadel, La Viola got one back with Vargas pouncing on a Monto rebound

Milan were reduced to ten men with a second yellow on Ibra, who gave some extra to the officials as he left and looks to miss the next few games again.

Boruc - looked shaky early, but made a couple of good saves on one and one chances, really had no chance on the two goals, 6

Montolivo - completely invisible for 60 min. totally owned by seedorf and co. got a shot off that was scored by vargas. 5
Vargas - probably the most angerous man on the field in purple, even with having to play back to cover for Pasqual who continues to ignore the coach and plays forward instead. 7
Donadel - buh bye. he's done. lucky to not get a second yellow. 5; Behrami - total stud, i look forward to a long career in purple for him. 6

Santana - looked good early, but disappeared late and was seen with his hands on his knees completely gassed, still not fit for 90 minutes and may never be, could be the last few weeks for him in purple. 6
Ljajic - Tried real hard and had a good shot early, but has no consistancy and is subbed out at the half, spent the second half in the stands next to Jojo. I don't think Mr Mihjlovic has been good for Adem. 5; Babacar - sparked the Viola offense, has a lot of room to grow, but shows great promise. 6
Gila - with no defense and no midfield, he was left to fight for long balls. not really a factor 5

Mihajlovic - did not like his starting lineup and cannot fathom why he's so committed to the old players. in his defense, all three substitutions made a positive difference, but it wasn't enough to make up for the typical slow start and the poor play of his initial starters. i can't see Firenze fans standing this guy or his style much longer, much less another season.
They always say the rebound boyfriend/girlfriend never works and Sinisa sure isn't San Cesere. 5