Share All sharing options for: Fiorentina 3-Catania 0; Isn't It Time 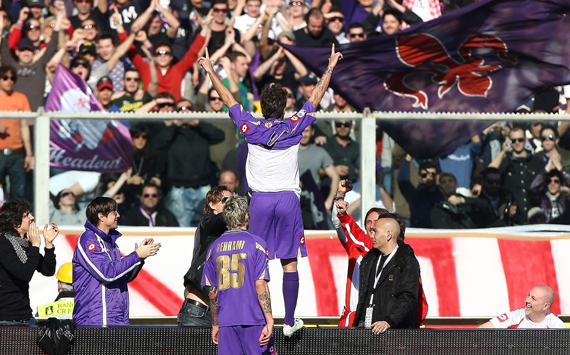 Adrian Mutu follows the cue from the Viola Babys, nets a brace and leads Fiorentina past Catania at The Franchi.

It had been a long time since Adi Mutu had asserted his offensive dominance on the glorious green pitch of Stadio Artemio Franchi, and given that voices all over the globe (inc yours truly) were calling for Sinisa Mihajlovic to be fired, it couldn't have come at a better time.

The only physical difference in the Fiorentina lineup today from the debacle last week in Bari was the addition of Mario Alberto Santana and he did add a lot to the attack, but the mental difference, especially in Mr Mutu was strikingly obvious, as Adi took it to the Catania defense from the get-go and several players, notably Ricardo Montolivo, Manuel Pasqual and also Santana, took the ball at the Catania players and beat them in the one on one battles.

Recap
Catania came into the match with only 29 points and the relegation zone hanging darkly close below them, but they had only scored one goal in their last four away matches, all losses, so it seemed likely that if Fiorentina could show any sort've offense at all, this would be the time.

The first 20 minutes were ragged on both sides of the ball with several Viola offsides and fouls from both teams, but in the 21st minute, Fiorentina earned a corner, which Mario Santana served straight to Alberto Gilardino, who headed it towards the goal to an open Adrian Mutu, who made no mistake. Gila did not celebrate, to a teammates dismay, as he had had his head sat on.

That effectively ended the game for all intents and purposes. Viola added a third goal in the second half on a counter with two very obvious offsides passes

Report Cards
Boruc - only called on for two saves but was solid on both. I wonder in the back of my tiny little pea brain if Mr Frey coming back isn't going to cause Artur some discomfort. 6

Pasqual - first time I've seen him out run the other teams defender in a long time. it comes to my mind that Prandelli never let Pasqual play on short rest. the one game a week schedule for the rest of the season may help Manuel out. he did grab a guy and get a stupid yellow, but it was early 6
Comotto - solid, played forward a bit, never really had a worry 6
Gamberini and Natali - Catania had 15 shots, but only 2 on, the center was solid 6

Donadel - clumsy early, early yellow might have settled him down a bit. 5.5
Montolivo - took a bit to get going, but always drove forward after that. 6
Behrami - solid on the ball, never flashy but wins balls beter and better 6

SAntana - really need him in there, not sure how we're going to get vargas and jojo back in the lineups without sacrifcing Mario. 7.5
Mutu - man of the match. looked like the old mutu taking it at guys, earing free kicks and cleaning up garbage. 8
Gila - got an assist and a goal and really looked to work and pass with mutu. 7

Mihajlovic - if you give the coach crap for poor performances, than you have to heap praise on them for the good ones as well. subs didn't do much, except for Babacar who made some nice runs and was very close to scoring a few times 7

Looking Ahead
The win brings Fiorentina back to tenth place, 2 pts from Cagliari, 3 from fading Palermo and 4 from fading just as bad JUventus.

Next match away at Chievo Verona, who haven't scored in the last two matches and haven't won in the last five.
Viola must prove they can perform on the road, however, or all the good feelings won here will be lost on the winds, as the Big Squads are coming to town.