Baby You're a Firework; Fiorentina 2 - Roma 2

Share All sharing options for: Baby You're a Firework; Fiorentina 2 - Roma 2 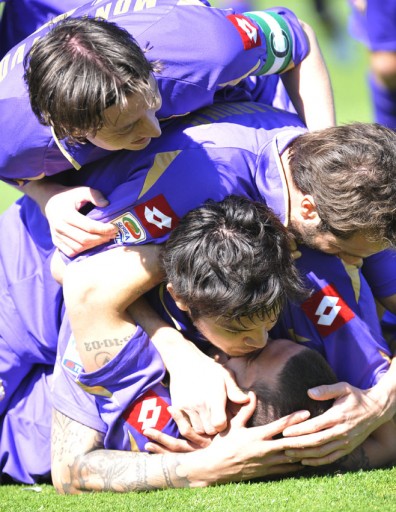 Today in beautiful Florence, the purple people brought a well fought game against Roma and came away with a less than deserved draw.

The Romans came into Florence on the heels of a 2-0 derby win last weekend, but they weren't expecting the sort of game the purple people would put up. In front of a descent 20,000 + crowd we attacked with brilliant counterattacks, unlucky to have hit the post twice, and gave Gambero his first goal since 2007.

First Half
The assault started as soon as the 2nd minute with a Behrami cross that Gila fired over the crossbar. Doni was tested time and time again by Behrami, Vargas, and Gila while Roma spent the first 20 minutes pinned in their half. At 18 minutes Gila chipped the ball from just outside the area, but the linesman raised his flag. Replays however showed that the ball had been misplayed by Burdisso and the goal was in fact valid. At 21 minutes confusion in midfield suddenly liberated Mutu who showed flair as he rushed passed Mexes and slotted the ball into the far corner. A classic #10 goal that proves that Mutu is well and truly on his way back if not there already.

Fiorentina had little time to celebrate as at 24 minutes Riise was knocked down by Comotto and a clear penalty was given. Totti stepped up and converted to bring Roma level and score his 200th goal. Ten minutes later Totti served Menez who fired at point blank against Boruc who smothered the ball. At 35 minutes Fiorentina earned a corner, it came over from the right side and through a Mutu assist the ball found itself at Gamberini's feet who fired it in for the 2-1, Gambero himself could hardly believe his goal and it brought Fiorentina into the lead. Fiorentina should have doubled minutes later when Mutu was found in the area and his header rattled the crossbar. But Roma held on and Fiorentina went into the half 2-1 up.

The second half started off with a bang, literally, Vargas found the ball just on the edge of the little area and in midair fired a violent try that smashed on the crossbar. A moment of distraction brought us down back to Earth when the entire defense apparently forgot about that Totti guy who was left completely by himself in the center to creep up, catch the ball, and fire past Boruc. Roma were back in the draw. The last 30 minutes of the game was a change of pace into a game of fouls, free kicks, and the game became locked in midfield limbo. Mihaj tried to brighten the pace bringing on Ljajic, D'Agostino, and Babacar, but tiredness set in. At 81 minutes Menez was booked for blatant simulation in the area and Babacar mowed down De Rossi. After five minute of rather non-played injury time the referee blew the whistle and the 2-2 score brought a point to both sides.

Boruc - In complacent on both goals. Nice save on Menez. 6

Pasqual - Can't seem to throw a ball back in, can't seem to remember who his team is, and distracted while Totti ran up on his side for the 2-2. 5

Gamberini - Always the steel man at the back, scores his first goal in 4 years but at fault like the rest of the defense for Totti's goal. 6.5

Ironically, Gamberini's last goal was against Roma, on the same side of the field, from a corner, in a match that ended 2-2.

Natali - Good tall jumping man in the back but tends to commit stupid errors and fouls. Wheres Camporese? 6

Comotto - At fault for mowing down Riise and giving Roma the penalty. 5

Behrami - The hard man in midfield, he fights, he's physical, and nearly every action begins with him. Well done Corvino. 6.5

Montolivo - A first half of applause, hes finally returning to the fast creative midfielder he once was. In the second half however hes a little blander and seems intimidated by De Rossi. 6.5

Vargas - After a year of torments, Vargas uses his physical size to scare the Roma defense twice in the first half, and then fires what would have been a brilliant goal into the crossbar. 7.5

Santana - Two great slaloms through the Roma midfield and a shot or two. Its his corner that finds Gamberini for the 2-1 but tiredness shows in the second half and hes rightfully subbed. Corvino wheres that contract? 6.5

Mutu - No hes not a great player. Hes simply the fenomeno. Hes finally rolling back the clock and showing how much power is still in him. Florence is about to if not already forgive him. Fights in the first half, shows pure power as he beats Mexes for the 1-0 and then slams the crossbar minutes after Gambero's goal. Welcome home. 7.5

Gila - Gila hasn't been the one we love for a while now, but he makes the team rise and move forward, scores a rather incorrectly judged goal, and tries to find open spaces. Still, needs to get his form back. 6

Ljajic - He enters at the worst moment of the game and doesn't find many playable balls. 6

Mihajlovic- Mihaj shows that even without his players at 100% and important players still missing, hes going to take a game to big teams. Still I was a little disappointed with taking out Vargas for D'Agostino. We needed more muscle in the final 10'. One of the best first halves of the Mihaj reign where Roma suffered for just under an hour. Hes kept a very positive 2011 streak thus far.

In two weeks we head to a very resilient Cesena side, where the seahorses have been turning their little park into a terror for big teams. We might see Frey back and edge ever closer to JJ-Day. In the meantime, Camporese goes on tour with the U-21 Monto and Gila go back to see San Cesare, and Vargas, Mutu, and Behrami all head to their sides.