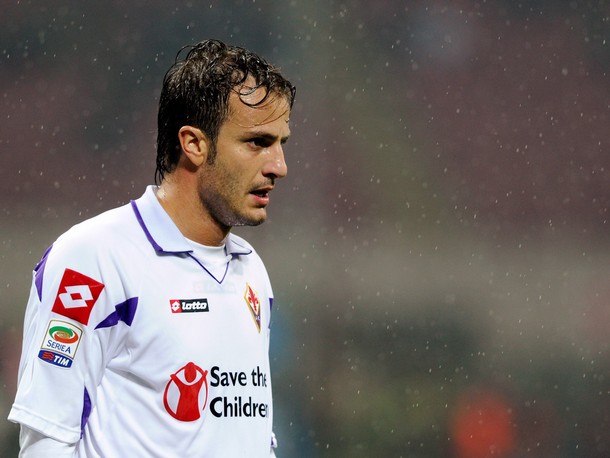 "There are times that you feel you're part of the scenery..."

Today, on a wet vacant lot, in the rain, in an echoing, nearly empty, cavernous mausoleum called the Stadio Marc'Antonio Bentegodi in Verona, Italia, Alberto Gilardino again struggled to find cohesion with Adrian Mutu in a match against the Flying Donkeys of Chievo.

Luckily for Sinisa Mihajlovic, a couple of doods with three names and Artur Boruc made the trip, as well.

Mario Alberto Santana and Juan Manuel Vargas charged and connected and caused havoc for the back side of the Mussi Volanti and finally created a goal in the second half off of a free kick that made the difference in a chippy, back and forth match that quite easily could have been 4-0 or 0-0. Boruc was called on for five saves , one spectacularly with a toe, to preserve the clean sheet.

The loss was the 4th straight scoreless result for Chievo, leaving them in 13th place with 32 points, while Fiorentina move up to a lofty 8th place, reach their self imposed "Salvation" with 40 points and continued a run with only 1 loss in 6 matches. La Viola wind up with 8 points out of a possible 12, before heading into a tough stretch with 3 of the Big Four coming to town. The result also raises the goal differential for Fiorentina to +4, better than every squad below them on the table and only 2 behind AS Roma and Juventus.

Recap
The first half was dominated by Fiorentina, with Chievo making several counters, but none were dangerous. At the half, Chievo had only taken three shots and none were on. Fiorentina had 10 shots and Chievo Goalie Stefano Sorrentino was called on for 3 saves.

First three minutes of the half were spent in the viola side, however, as they came out a bit shaky, giving up 3 corner kicks in the space of a minute, but Fiorentina began to slowly turn the possession back towards the Chievo side of the field.

Fiorentina squandered chances, with Pasqual serving a ball to Mutu, who put the ball wide. Replay showed Mutu was offside, but the official had missed it. Mario Santana had a breakaway on the goalie and hit the post. The half struggled to a close with the squads scoreless.

Within 3 minutes of the second half, Valon Behrami won a free kick close to the corner of the box and Juan Vargas made no mistake, putting it in the lower right corner of the net.

Chievo had a few shots on, including a weak shot which Artur Boruc got a toe to, even though his momentum was carrying him away from the play and another he stuck his face in. Gila had a chance close up on goal and could only manage a weak effort. Vargas got off a rocket shot or two before being subbed off for Marchionni, who failed to impress anyone and the rest of the match was Fiorentina holding on and launching the odd counter.

The rest of the match got chippy, With Gilardino getting a yellow card for wrestling and Behrami getting his fist into a defenders face, causing lots of blood, but no card. There may be further news on that play, however.

Gamberini - great tackle on Pellesier, but there was a general loose-ness about our defense I didn't like today. could've been the pitch. 6
Natali - didn't do a lot for me today, although he does win a lot of headers. 5.5
Pasqual - had a much better match. I attribute that in part to having Vargas in front of him and also to getting a full week of rest. couple of good crosses. 6
LDSilvestri - looked rusty to me, but he did ok. 6

Montolivo - helf the middle of the field really well, especially in the second half. 7
Behrami - nearly scored his first goal, required a great save. earned the goal scoring free kick 6
Vargas - we've missed him a lot. still can't go the full 90 tho 7; marchionni - we didn't miss him at all. -2

Santana - hit the post one on one with the goalie, but he makes a huge difference in this team 7
Mutu - struggled a bit, put a shot wide he should've buried. but results continue to come in with him on the pitch. 6
Gila - struggling, maybe the pitch, maybe the formation, but gila never looked comfortable. 5.5

Mihjlovic - got another win on the road, didn't succumb to his overly defensive reactions and brought on Babacar instead of a defender. didn't like the choice of Marchionni, but Ljajic is more of a forward than a midfielder and we were short of midfielders today. 6

Looking Ahead
AS Roma coming to town. nuff said...