Share All sharing options for: Parma 1-1 Fior - The Long and Winding Road 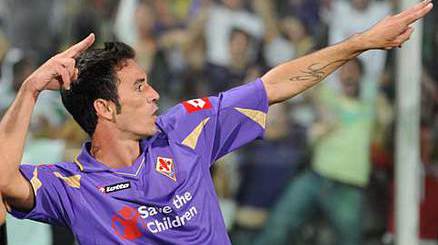 Another stop along the way and another point, thanks to a Gaetano D'agostino Penalty kick.

A result is a result and a point is a point, but these ties make me feel like I'm eating diet food, I know it's good for me, but I'm still not satisfied. An old Italian proverb says "Chi la dura la vince." or "He who perseveres wins at last." Let's hope that's the case as a trip to the Renzo Barbera in Palermo looms.

Fiorentina came into Parma on a scoreless away run, as they had lost to Lazio 2-0 and tied Napoli 0-0 in their last two away matches. In fact, Fiorentina have not scored 2 goals on the road all season, excepting a 3-2 loss at Roma back in November. With 8 goals in 12 matches on the road, It's real hard to win if you can't score.

Recap
The match started off lively enough for La Viola as they had 3 shots and a ball hit the post in the first seven minutes. Alberto Gilardino leaped on the rebound, and scored it, but was judged to have done so from an offside position. This seemed to take some wind out of the sails of Fiorentina as 8 minutes later they gave up a goal to Amauri. He always seems to score magnificent goals against us and this one was no different.

Pasqual played Whiny Mouse Sebastian Giovinco very loosely on the cross and Gamberini really couldn't do anything, nor could Boruc.

The rest of the half deteriorated from there, as least as far as La Viola fans were concerned, as Amauri got off another 3 shots in the next 15 minutes and the game got a bit more rugged and ragged, with an eventual FORTY EIGHT fouls and ten yellow cards being assessed for the match.

Questionable performances by a questionable lineup had Fiorentina fans scratching their heads at halftime as Cerci, Marchionni and D'agostino seemed to pass the ball every time to anyone that wasn't in a purple jersey.

It didn't take long for Fiorentina to draw even, however. Two minutes into the first half, Alberto Gilardino drew a free kick on the side of the box and Alumnus Massissmo Gobbi drug down young Camporese in the box for the penalty. D'ago did not disappoint as he needled the ball into the net.

That ended the offensive portion of the Fiorentina show as Sinisa Mihajlovic once again showed his tendancy to play for a tie on the road and subbed in Marco Donadel for Marchionni, Lorenzo DiSilvestri for Comotto (injury) and then finally put in the man everyone wanted to see, Adrian Mutu, but only after Valon Behrami came down with cramps. Fiorentina held on for the tie.

Like the original Grape Nuts, this style is very hard on fans to stomach. We want free flowing calcio we had, with our lads in purple streaming down the field like purple streaks, scoring nearly at will, of course we got scored on nearly at will too, but we got more than we gave.

Report Cards
Boruc - nothing he could do on the goal, made three other saves. 6

Gamberini - Has had better days, but was up against a tough customer, 5.5
Camporese - Earned the PK, played well on defense. i think we'll see more of him. 6
Comotto - played ok, still can't cross, but he was probably rusty. came off for cramps. LDS - looked tired
Pasqual - played too loose on the cross for the Parma goal, had some decent crosses, but had no connection with marchionni at all, 5

D'agostino - was pretty horrid in the first half, but making the PK seemed to shake some lethargy and he played better from then on. 6.5
santana - seemed out of place, again, that could be because of Cerci and Marchionni. 5.5
Behrami - looked like the only player on the same page with Gilardino, he has his oments when he just plows thru people ala donadel, and he got tired towards the end, but you can see he's going to contribute to this squad before it's over. 6; mutu - 10 minutes of hope, he controlled the ball, earned free kicks and got a shot off.

Cerci- ugh. he didnt complete a pass until the second half. i think his role is to come of the bench, rarely, if ever. 5
Marchionni - out of position and looked it, 5; Donadel - first of the defensive subs. held the tie. blah
Gilardino - half a step offsides from getting on the sheet early, but after that not much going on, i think he'll profit from mutu as much as anyone. 5.5

mihajlovic - yes, we're still playing on short rest and still injury depleted, but at some point you have to try to win a freaking game on the road. frustrating 5

Looking Ahead
There are International friendlies mid week, Gilardino is likely to be called for Italy's trip to Dortmund. Kroldrup is likely to be called home for a visit from England, Vargas, being injured, will hopefully just stay home for Tuesday's match in Peru, but you never know with him. The match with Palermo is the early Sunday match, 6:30am Eastern. Monto should be back, Mutu might get the start, and hopefully Vargas will be back as well