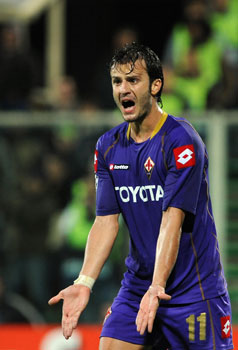 It was a Heartbreaker and a disappointment for those that got up early and expected to see a Serie A Match.

Instead, two squads that started the year with high hopes faced off today at the Franchi after a season of turmoil, with suspensions, injuries and forced transfers claiming the headlines and their performances today showed exactly why both are mired in Mid table mediocrity. Sampdoria looked barely interested to be there, packed it back and seemed content with a scoreless draw, while Fiorentina looked willing to score, and had the ball in plenty of space to score but never really looked dangerous or likely.

The tie, combined with other results, drops Fiorentina to 11th place, 9 pts above relegation and 9 points from European Competition. The match also marked the return of Juan Manuel Vargas, who looked lively, but a tad rusty.

Recap
First half was a back and forth lackluster affair, with few chances, but the second half was all Viola as Sampdoria packed it back and played for the tie. You might not like the strategy, but it got Samp a point as Fiorentina proved unable to put together enough of an offense to break through and score.

Report Card
Boruc - made a good save, solid 6

Gamberini - solid on D. played forward a bit due to Sampdoria packing back all second half. 6
Natali - good job, solid. wins a lot of headers 6
LDS - played on the wrong side of the mid field line most of the match, again sue to samps style, never really got a good cross in 5.5
Pasqual - played better, forward like lds most of the match but his crosses were much better 6

Donadel - workman like but tired. 6
Behrami - if there was a man of the match it would be him, worked hard, got a shot off, looked the most dangerous of our players. 7
Montolivo - looked tired. better in the second half, kept the ball in the Samp side. 6; Vargas - looked rusty, but you can see where he'll make a difference on the left side. I look forward to seeing him start next week. 6

Marchionni - had a decent first half, but gave away passes and almost a goal in the second half. subbed for ljaic 5.5;
ljajic - didn't have the impact as before, but he came on with our side being tired.
Mutu - very tightly marked and he looked tired. once vargas came on, you can see how this squad is going to form up, however. 5.5
Gila - also looked tired, had a few chances but couldn't get them on with any venom. sampdoria had a lot of bodies in the box, it must be said. 5.5

Mihajlovic - needed three points from this, he didn't anticipate the Samp game plan and couldn't or didn't get the right adjustment in. This squad had better get 3 pts at Bari or we might see the end of him 4

Looking ahead
Away at last place Bari. Bari has given up 17 goals at home, if we can't score there...