Share All sharing options for: Fior 1 - Inter 2; You Always Hurt the One You Love... 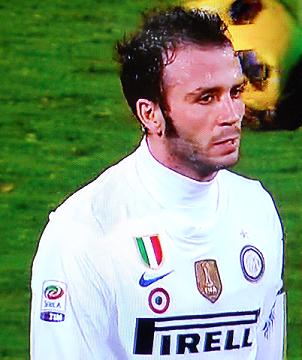 Giampaolo Pazzini chooses not to celebrate, but it seems he usually chooses to score against his old mates, and today was no different.

It was a surprisingly even match, with each side getting a fluke goal in the first half, but it only took one moment of brilliance by Samuel Eto'o to expose a weak and porous Fiorentina defense and serve the perfect ball to Pazzini.

To add to the disappointment was an injury to Mario Santana and another short turn around for an already exhausted squad.

Highlights
First goal was really a result of Fiorentina being unable to get back, maybe they pressed to far ahead out of exuberance, i don't know. Camporese is pretty good against 95% of the league, Can't really blame Camporese too much to failing with the 5%

Second goal was a lucky cross

Looking ahead
Seeing how I didn't expect a point from either of this weeks matches, and they exceeded my expectations greatly on Sunday, I'm going to give the lads a break and not grade them.

This is where it gets scary, for me at least. This squad plays to the level of their competition. Sampdoria has sucked since the break. Mihajlovic must fight a serious let down this weekend. Probably no Mario Santana, but we might get a Juan Manuel Vargas sighting