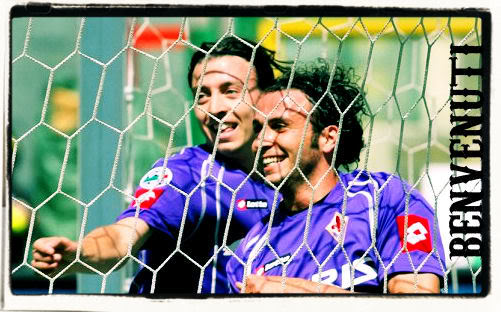 B.F.F's Pazzini and Montolivo meet on opposite sides of the field in a makeup of the lost game from December.

Inter are coming to Florence to make up for the game they lost going into the Intercontinental Cup in Japan. Fiorentina are coming off a rousing 4-2 win in Palermo, while Inter hobble in from a 1-0 loss in Turin over the weekend.

Both teams are looking to finally get a grip on their seasons. The purple people are finally starting to look like a half convincing team, and Behrami has already become a solid midfield fit, while Inter look to launch themselves into the top four once again.

Inter very rarely have an easy ride at the Franchi, and last season we held our ground with a 2-2 draw. Keirrison opened the scoring, holding them for a majority of the game before a quick turnaround by Milito and Eto'o, before Kroldrup leveled it late. Mihaj also beat Inter with his Catania last season.

Fiorentina will play the same 4-3-3 formation they played in Palermo. Boruc will start in goal, De Silvestri, and Pasqual on the wings with Gamborese in the center. Montolivo, Donadel, and Behrami in mid, and Santana backing up Gila and Mutu up front. Vargas, JoJo, Frey, and Kroldrup still out.

Inter come to the Franchi resting Lucio before their Champions League match, and without Mariga, Samuel, or frequent viola scorer Milito. Rocky Chivu is suspended for two matches.

They'll come with Julio Cesar in goal, Maicon, Ranocchia, Cordoba, and Zanetti in the back, Kharja, Thiago Motta, and Cambiasso backing up Sneijder, Eto'o, and ex-man Pazzini.

Eyes on Camporese and Ranocchia, these two just might be Italy's future defense stars. Pazzo is obviously out for blood in his former hunting ground so containing him, Eto'o and Sneijder is a priority for our defense. Gila has shown to get some of his marksmanship back in recent weeks so heres to hoping Mutu finds his soon.

As with any other big match we run the risk of getting the occasional troll. They won't be tolerated and any insulting posts will be deleted. Johonna is a a friend here so don't go posting remarks on the Inter side. Lets keep it fun here.

Just for fun, this is the spot that Pazzolivo did for Nike when we were thoroughly convinced that Pazzini and Montolivo were in fact the same person.