Pink 2 - Fiorentina 4; Get The Party Started

Share All sharing options for: Pink 2 - Fiorentina 4; Get The Party Started 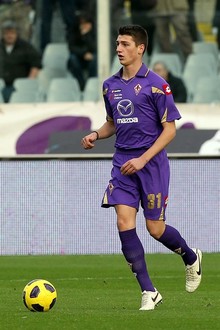 And there is reason to celebrate with the first career Serie A goal for Michele Camporese and the first goal of the Season for Riccardo Montolivo to cement the first road win. This was also the first time that Fiorentina have scored four goals. The four goals and the road win were the first since March of last year as Fiorentina came from behind twice to defeat Palermo in Sicily.

Also celebrating will be Alberto Gilardino with his 8th goal of the season and Adem Ljajic will be happy with his cross on the Bovo own goal and his assist to Montolivio on the Insurance Goal. La Viola have returned to the top ten. ALLE Viola

Recap
Given the poor away form, most Gigliati had to feel that this matchup in sunny Sicily would be another tough road to hoe, and although, with the addition of Adrian Mutu and Valon Behrami to the lineup, the squads looked to match up fairly evenly, Palermo jumped out early with a goal by Jesus, er Javier Pastore.

The opening goal seemed to shock Fiorentina awake and they took possession of the ball and took the match to Palermo the rest of the first half. Half an hour after the opening goal, Alberto Gilardino took a great cross by Behrami and beat Ezequiel Munoz and headed the ball past goalie Salvatore Sirigu.

Munoz could've worn the purple shirt, but he thought he was worth more than Pantaleo Corvino did and went south instead. Today, at least, Corvino was shown to be correct as Munoz was ineffective and was beaten time and time again and was finally subbed off.

Going into halftime, things looked bright for Fiorentina as they had the advantage statistically, but coming out of the locker room, the team looked as if they had fallen asleep and conceded an early goal within the first three minutes.
A nice drive and cross from Fabrizio Miccoli was headed into the corner by Antonio Nocerino.

Once again, the early goal seemed to shake the lads from their stupor, however, and they began to slowly turn the tide back towards Palermo again until minute 70 when Camporese was left unmarked and made no mistake.

The goal seemed to invigorate Fiorentina, Montolivio drilled a long shot off the post and Palermo looked in danger of coming apart at the seams. Adem Ljajic came on for Mario Santana and took control of ripping the Rosanero heart out.

and a nice drive/cut back, followed by a perfect serve to Montolivo, who made no mistake and it was all smiles on the pitch and the sidelines.

A nice gift to lighten the hearts of the Delle Valles who are sadden by the loss of ADVs Father in Law.

Boruc - seemed asleep on the first goal and could've been better on the second, made a few saves but really wasn't a huge factor 6

Gamberini - had some shaky moments, 5
Camporese - man of the match, great on defense, first goal. 7
Pasqual - better on defense and in moving the ball forward, but horrid all match at crossing with the exception of a cross to Camporese for the tie. 5
Comotto - played pretty well, made a mistake or two, but fairly solid 6

Donadel - typical Donadel performance, hard work, little mud, little glory but did his job 6
Montolivio - Played much better in the midfield, made the right choices most of the time, nearly scored from distance and made no mistake in the box. 6.5
Behrami - lots of hard work, earned some free kicks, served a nice ball for Gila's goal. you can see he'll be integral for this squad. 6.5

Santana - most effective man in the Palermo zone in the first half, but went to sleep on the Nocerino goal. subbed for Ljajic; Ljajic - second best man of the match, came on and made an immediate impact. cross to Gila that Bovo put in for an own goal and the assist to monto. 7
Mutu - got close on a free kick, earned a few free kicks including a yellow card on young Munoz, you can see he still is not fit, but you can also see what he's going to bring once he is fit. 6.5
Gilardino - worked hard and got away from his defender early and got the first goal, didn't do much the rest of the match. 5.5

Mihajlovic - this one could've gone either way for the coach. whether it was the early start or something else, this team came out asleep and gave up the early goal AGAIN, and then did it again after halftime. it looked real bad for the coach,. but he subbed in Ljajic and that really made the difference. Subbing Natali for Mutu was perhaps a bit over conservative, but it worked out. 6

Looking Ahead
WE have another short turn around with Inter coming to town on Wednesday. Inter is in Turin for Derby d'Italia with Juventus and has a Champs League match upcoming, lets hope they're distracted.