Share All sharing options for: Fior 3-0 Roma; I Remember You 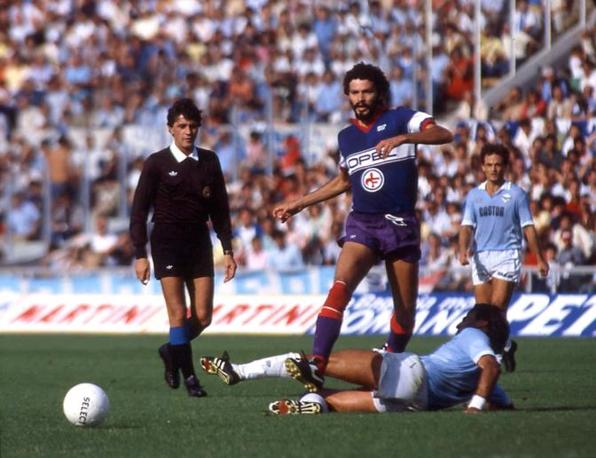 Sorely in need of points, Fiorentina moved up from Skid Row to Mid-table in the standings, got new coach Delio Rossi his first league win and embarrassed hated rival AS Roma in a 3-0 rout that saw three Giallorossi sent off on the rainy Stadio Artemio Franchi pitch.

Stevan Jovetic set the tone early, being dragged down in the box and converting the penalty. Juan received the first red card of the evening, but being a man down didn't do anything to dampen Roman hopes as their team continued to out possess the team from Firenze. In fact, AS Roma outpossesed Fior 57% to 43% for the whole match, although Fiorentina out shot Roma 20-7 with 6 shots on to Roma's 2.

Right before the half, however, Fiorentina earned a corner which Captain Gamberini headed in to virtually seal the match.

A later second yellow to Gago and Bojan deliberate handball off the line, which set up Santiago Silva's first goal in purple off a Penalty kick sealed a nice purple afternoon, tinged in sadness and yet filled with bittersweet joy.

Report Cards
Boruc - much better match than last week. free kick in almost the same spot as last week, he calmly set his wall, took a good position and the wall took care of the ball. Made the two saves required for another clean sheet 6.5
Gamberini - now that's what a captain does after a bad match, play absolute solid lock down defense and get the second goal to seal the match and crush Roman hopes going into halftime. 7
Nastasic - rock solid nerves in the box, dribbled out of trouble across the goal face and took the ball all the way out to the wing and cleared it. so nice to see someone so calm in possession. Would've had the third goal had Bujan not forgotten he couldn't use his hands. 7
Di Silvestri - Even a man down didn't look solid in defense and had very few forays forward. Cassani should be training with the squad within a week or two. 5
Pasqual - had a solid game, his side was rock solid as well, 6
Montolivo - struggled in the first half, although he made some saving defensive interceptions of passes in the box. better in the second. got a serie a assist finally 5.5
Behrami - gave up another free kick in a dangerous spot and seemed a little out of sorts out on the right in the first half. second half played better. 6; Munari came in late n/a
Vargas - best match of the year for El Loco by far, had a bit more pace, got some great crosses in and filled the left lane. 6.5
Lazzari - still a big question mark for me. clumsy, not a crisp passer, he got 4 shots off, none of them on goal 5
Gilardino - only got one shot off, over the bar and was subbed out 5.5; Silva - got his first Serie A goal 6
Jovetic - Man of the match. FIVE shots, four of them on goal and a PK. beyond the stats, he sliced through Roma's defense like it were Pecorino Romano. Clearly this is our Talisman. 7.5

Rossi - first win, good game plan, clearly Rossi is thrice times or more the tactician of you know who. That's 4 points of 9 for this tough stretch with one more to go at struggling Inter. 7

Looking Ahead
If you have to play Inter at the San Siro, a time like now would be what you were hoping for. Fiorentina soaring and Inter reeling, 4 points from relegation coming off a loss to Udinese and having a mid week Champs league match. This is still Inter, however, with all that implies and Fiorentina are still looking for their first road win and Inter have already won their
UCL group, so most of the starting lineup should be rested.