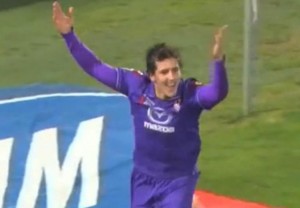 Stevan Jovetic rescues a point for Fiorentina with his seventh goal of the season.

Well, it's nearly Winter break and Fiorentina fans are left wondering what, if anything, team management does during the winter market to shore up a team that is clearly missing something.

Delio Rossi's squad made it though the toughest part of the schedule with a semi-respectable 4 points, but a home match against a newly promoted squad with Montenegran star Stevan Jovetic back from injury seemed to be one that Fiorentina had to win, and, once again, they failed to secure all three points, tying Atalanta at the Franchi tonight 2-2.

The pattern remains, perform above expectations against the top squads, under perform at home against squads they should beat and no performance at all on the road. The latter being one that has to end next match at Siena, or La Viola will surely be flirting with, or in, the Relegation Zone, and a sad holiday season it will be, indeed.

Recap
It was a bad week for the people of Firenze and many of them just stayed home this evening as barely a third of the stadium was filled, but even so, La Viola started off lively, with newcomer Amidu Salifu immediately making a difference as he started a nice play with a long pass to Juan Manuel Vargas who crossed it to a cutting Alberto Gilardino for the score.

Fiorentina controlled most of the rest of the half, but never were likely to get the second goal. The second half started to turn Atalanta's way more and more, but it wasn't until Vargas and then Salifu were subbed out that Atalanta started to take control of the match.

Even still, on a solo break away run, Valon Behrami slammed a shot on goal, Atalanta goalie, Andrea Consigli, just managed to deflect the shot off the corner of the woodwork, denying the midfielder who plays like a madman his first Viola tally.

Shortly thereafter, at minute 80, Manuel Pasqual allowed Schelotto to get around him and in trying to catch up got punched in the face and had to sit the following play out. Down a man, La Viola were unable to clear and an unmarked Andrea Masiello punched in the rebound.

Five minutes later, Schelotto crossed to German Denis a yard in front of Artur Boruc's net and he buried it, but Jovetic tied it 3 minutes later.

Report Cards
Boruc - only two shots on goal for Atalanta, both went in. On the first he was out of position, but the second he couldn't do a thing about, 5
LDS - much better match for LDS, he was faster, he had good crosses, he played good defense. 6
Gamberini - for 85 excellent minutes of defense a 7, for 5 minutes of crap, in which he was invisible while atalanta scored two goals, a 3, which averages out to a 5 for the match. spent a lot of time barking at the bad rookie ref.
Nastasic - could've done more in the bad 5 minutes, but has so much more presence in back than natali. will get better 5.5
pasqual - started out ok, but got tired or something and then consistantly got beat by that rat Schelotto. 5
Behrami - guys an animal and it there was any justice, he'd have gotten his goal today. 6.5
Salifu - first half he owns the midfield, sit back and cuts off every atalanta probe, firing the ball out to a wing and starting the break, only came forward a time or two, but when he did, he wove through defenders like they were statues. took a kick to the nether region to slow him in the first half, back injury in the second took him out too early 7; Kharja - bah; took him 5 minutes after the injury to get in, he was completely invisible until the end of the match when it was all hands forward. doesn't want to live in town, not ready to play, not contributing when he is in 4
Lazzari - horrible. kicked one ball out of bounds without a viola player within 35 yards of the ball. gave up dangerous free kicks, passed the ball to no one, 4
Vargas - glimpses of the old El Loco, magnificent cross on the first goal. subbed out for Romulo, probably to save him for Tuesday. 6; Romulo - not of Serie A quality as of right now. he's lost. 4
Jovetic - took some shots to his sore hip early and hit the ground hard, but bounced right up, so I'm not too concerned with his health. he seemed a bit out of sync, but that's to be expected with a layoff, couple weeks off should do him wonders. had some nice give and goes late, but lacked the final trigger. 6
Gilardino - got off the scheid, but disappeared in the second, subbed for babacar, probably to get some rest for the quick turnaround. 6l babacar, not really enough time.

Rossi - had the team ready to go, got the early goal, but couldn't expand the advantage. That's something this team needs to work on, I'm sure it's just focus. without salifu, there was a big gap in the midfield again. point is better than none, but this is a missed opportunity. 5

Coaches quotes:
“In the second half we lost the midfield. We couldn’t close Atalanta down and were pegged back,” confessed the Coach.

“We could’ve finished them off by going 2-0 up with Valon Behrami, but then the mistakes made things more complicated for us.”

Looking Ahead
Tuesday afternoon Fior travels to Siena for the Tuscan Derby. This match was originally scheduled to be match day one, but the player strike put it back. Siena always play La Viola tough and one Gaetano D'agostino would like nothing better than to hand Fiorentina another road loss.

Siena lost at Milan, 2-0 today and is 17th in the league, while Fiorentina are 15th, 5 points ahead of relegation.

Question marks for the next day or two in PurpleLand will be the condition of Salifu, Cassani and Montolivo and which, if any, can and will go Tuesday. Salifu's injury is being reported as an injury to the Latissimus Dorsi in his back.