A Tale of Two Tanques and The Delio Progress Report: Fiorentina-Atalanta

Share All sharing options for: A Tale of Two Tanques and The Delio Progress Report: Fiorentina-Atalanta 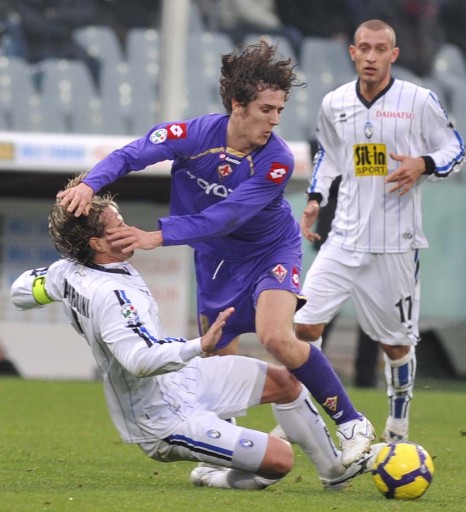 Delio's trial by fire is over...or is it?

After weeks of grueling games against Milan, Palermo, Roma, and Inter, Fiorentina come out of the dark into a more reasonable schedule before the Christmas break as they welcome Atalanta to the Franchi.

Fiorentina took a step back of sorts as an injury riddled team took a 2-0 loss at the San Siro against an obviously angry and motivated Inter. Europe aside, Delio Rossi's Fiorentina is still the mismatched group of rebels and individuals that are looking for a rebuilding and motivating come January. Still things aren't as bleak as they seem.

Atalanta on the other hand have been having as descent a season as a Serie B team could want. Without their penalization they would be at the upper reaches of the table, and are led by the functional Tanque Denis with 10 goals to his name and the up and rising Maxi Moralez. Atalanta have drawn their last 3 games, notably frustrating Napoli last week in a 1-1 tie yet have had a relatively nicely drawn out schedule.

Fiorentina on the other hand are looking to relaunch themselves before the winter break, yet are still struggling to find personality and teamwork which seems to appear only when JoJo is moving them forward. We've struggled with a series of midfield combinations that while occasionally moving the ball forward don't produce magic or sublime results often leaving the front two isolated and desperate.

However we have to ask the question - Is Delio at fault? The answer to that question stems from a number of factors. I said at the beginning of his tenure, that we shouldn't expect much from these next four games, and in fact for two of them we were relatively successful...at home. A thrilling 0-0 draw with Milan with Nastasic thrilling the crowds the same way Camporese had, and a justified 3-0 win over Roma which was a perfectly played match, have been the positives of his purple reign thus far. So why are we still so nervous? Simple answer, this still is not Delio's team. Rossi has had to work with the leftovers from a poorly planned transfer campaign and has shown his distrust in wisely replacing them with the far more successful Primavera team. Until Delio gets to call the shots and organize the team the way he wants, we'll see his hand at work. Until then, the shadow of Mihajlovic looms large on a largely static midfield and defensive wingers. Furthermore, the dissent in the dressing room still hasn't quelled, we know Montolivo still wants out, Vargas is in Rossi's own quotes "far from good form", and Lazzari + Cerci for all we know are still turning up late to training while celebrating victories over...Empoli?

However one of the biggest positives of his time has been the Primavera factor. Salifu is now first team material, Primavera boys are training with the first team, Camporese and Acosty are signing long term contracts, and despite Rossi picking the little ones dry, the Primavera are still winning, most notably accessing the semi-finals of the Coppa Italia and bouncing between first and second in the scudetto race.

How about Babacar? Rossi realizes his importance, and recognizes him as an important member of this team. Babacar is already interesting offers from some of the biggest names abroad and is still somewhat a mystery in this current Fiorentina incarnation, however with a possible starting berth, and the effect of an out of form Ljajic, his potential and permanence will be reborn.

The match tomorrow is important for several reasons. It serves as a moral victory, a jump up on the table, and a push for the youngsters to hold more weight week after week. Rossi is going back to a 4-4-2 with Boruc in goal, covered by De Silvestri, Gamberini, Natali, and Pasqual. In midfield, Vargas returns to his Prandelliesque far wing position with Behrami, Kharja, and Salifu covering for the injured Montolivo while JoJo returns in time to partner Gila up front. Cassani and Kroldrup's returns are still unknown at the moment.

Atalanta come with a 4-2-3-1 with Consigli in goal covered by Masiello, Lucchini, Manfredini, and Bellini in defense, Cigarini and Carmona holding a 2 man midfield, backing up Schelotto, Moralez, and Padoin behind German Denis. Capelli, Brighi, and Tiribocchi are all sitting out, and Doni holds his betting suspension until February 2015. 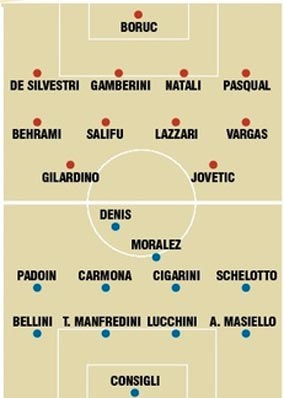 The Tactical Key
The interesting part about this match up will be Salifu's first start replacing Montolivo, who may have played his last game in purple against Roma. After a positive game against Inter (one of the few) he holds the responsibility of moving the team forward. The worrying part of this is an obviously out of shape Vargas, far from the man that stunned us 4 years ago, he is seemingly a shadow of the man that looped one sublime cross after another and might need some extra support from Pasqual. Still the dangers here are obviously Denis, Schelotto, and Moralez, and dense man marking is going to be needed, which means perfect synchronization between Boruc and Mr Christmas especially.

Beyond the field, it's been a turbulent week both for the city of Florence and the Fiorentina boardroom. The city of Florence was rocked this week by a series of racist motivated public killings affecting the city's Senegalese community. However the city has come out in a show of support and a moment of silence will be recognized before tomorrow's match.

Diego Della Valle is also suing lawyer Guido Rossi for failing to publicly divulge all details of the Calciopoli scandal as a peace accord between clubs broke down and rulings still stand. However as DDV puts it, the peace talks have "opened a path even if we didn't get the desired results."

Despite turbulent times, we've passed the worst, and it'll be up to January to see what is truly possible.