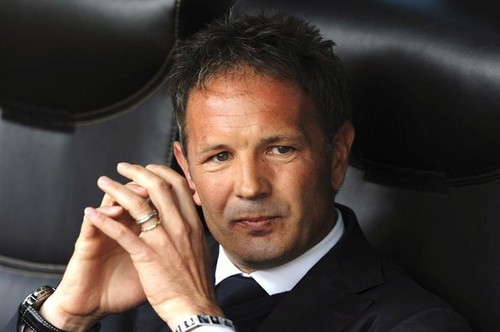 With the steel of the defense and the heart of the midfield taken away with injuries to Mattia Cassani and Valon Behrami early, and a later injury to Cesere Natali, Fiorentina sputtered their way to another depressing loss at Chievo this evening.

A tremendous rainstorm, leading to floods and deaths in other areas of Northern Italy, only served to add a dark grey, wet background to a dull listless Viola team that didn't look likely to score even before anyone was injured. Fiorentina had 12 shots, only two on, headers by Lazzari and Munari.

Chievo's lone goal was scored by Luca Rigoni as Artur Boruc leap clown-like off his line. The win raises Chievo to 14th and lowers Fiorentina to 13th, both squads join 3 others with 12 pts, 4 pts ahead of relegation and 4 pts behind the last European spot.

Officals from Fiorentina, Cognigni and Teotino, were quick to deny that Sinisa Mihajlovic was at any fault, blaming injuries and "some players" attitudes, but added that results and Viola's current position in the table were not acceptable.

Report Cards
Boruc - two saves, but looked goofy on the one goal 5
Cassani - injured ankle twenty minutes in; Di Silvestri - caught forward time after time, knocked people down in and around the edge of the box. nowhere to be seen on the goal 3.5
Pasqual - pretty typical pasqual game, couple of crosses out of bounds 5
Gamberini - played pretty well considering the personnel changes around him. missed a header just wide on a corner. 6
Natali - played hard, won a lot of header, but dragged a player down just outside the box and got yellow carded. misses next match 5; Nastasic - didn't look ready to come in, got schooled, but it wasn't the best situation for him to debut, might get milan next. 5
Behrami - played hard until the injury 6; Munari - played out of control, gave the ball up time and time again with the team in a forward position. Almost redeemed himself with a header that required a good save. 4.5
Montolivo - lost and yet the best we have. He'll run off to San Cesere and have a wonderful two matches i'm sure 4
Lazzari - as invisible as the rest of the midfield. 4
Romulo - other than Jovetic, really looked like the only player who wanted to be out there. that being said he sucked pretty badly. he's playing out of position tho, as well. 5
Gilardino - offsides all the time, doesn't seem to be part of this offense 4
Jovetic - seemed to be the only one that wanted to do anything except stand and shiver. Nearly got the go ahead on a free kick 6.5

Looking Ahead
International Break should hopefully give Behrami and Cassani time to heal as Milan comes to town next.
Natali's yellow gives him the match off, Nastasic will probably get his first start.