How to Tame A Flying Donkey: Chievo-Fiorentina

Share All sharing options for: How to Tame A Flying Donkey: Chievo-Fiorentina 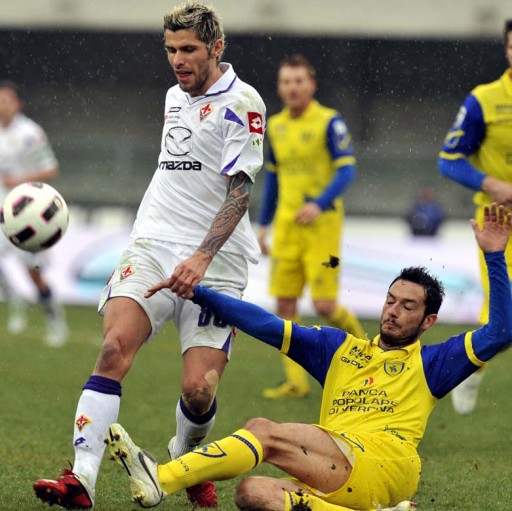 Fiorentina are off to the Bentigodi to face a demoralized and injury plagued Verona as Mihajlovic tries to again save his seat.

With a much needed but unconvincing win against an in form Genoa last week, Fiorentina head up to Verona to face the Flying donkeys in a match that will find Fiorentina hoping to pick up their first away points and show some needed continuity.

Chievo are coming off three straight losses, most recently a 4-1 drubbing to Siena and have only scored once in their last 5 matches. Fiorentina are coming off their first win since September last week against Genoa and are struggling to find team unity, or keep players from running off from training during the week. Last season brought a narrow 1-0 win courtesy of a Vargas freekick.

Mihaj is dumping the 4-4-2 and returning to the 4-3-3 with Boruc in goal, covered by Cassani, Gamberini, Natali and Pasqual, Behrami returns to the pitch with Montolivo and Lazzari, and Romulo wins the starting position up front over Cerci, supporting Gila with JoJo. Kroldup is injured until the end of November with Gulan.

Chievo are improvising a 4-3-1-2 with Sorrentino in goal, covered by Frey, Mandelli, Andreolli, and Jokic. Bradley, Rigoni and Hetemaj sit on the shoulders of Sammarco supporting Pellissier and the ogre-like Moscardelli. Chievo are without Sarto, Cruzado, and Morero, and Cesar is suspended.

The Tactical Key
What worked against Genoa last week was more fluidity in the center of the area last week. Each player has to know where the ball is going to roll and everybody has to cover one another in the area. Romulo is going to bring increased energy on the wings but he could be subbed late with Cerci if Mihaj doesn't decide to park the bus. The dangers here are Pellissier, a classic target man, and Moscardelli capable of powerful long range shots to keep Boruc busy. The pitch may be sloshy due to the heavy devastating rains that have hit Genoa and the the northern part of the country.

Note:
From the Fiorentina Offside we wish Antonio Cassano a speedy recovery in the spirit of the game. Non mollare campione. Also we wish well to all affected by the devestating floods affecting Liguria and the north.