Share All sharing options for: Palermo 2-0 Fior; Still The Same 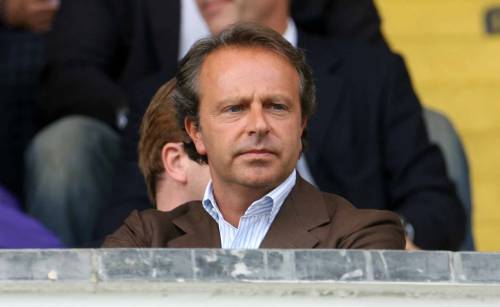 The head counsels patience, but the heart says otherwise, and ole Andrea isn't so well known for his brain... neither am I

It's only the second Serie A match for the Rossi Era, significant players are still injured and this is the toughest part of the schedule, but the continuing road woes by the Viola in a 2-0 loss at Stadio Renzo Barbera in Palermo, Sicily leaves everyone wondering in Firenze.

Palermo has won every match at home this season, just as Fiorentina has yet to win a match on the road, it was a predictable result, but the manner of it has left me seething and I can imagine that management isn't too happy either.

Mr Russo maintained his solidarity with the rest of the official corps in their plot to make Italian referring the worst in the world. A clear handball in the box was ignored, that would've brought the match to 1-1, but instead the scoreless Serie A streak continues as Fiorentina finished their third scoreless league match.

The win leaves Palermo in fifth place and the loss leaves Fiorentina in 16th place, three points and two places ahead of relegation, with matches with Roma and Inter next.

Report Cards
Boruc - horrible match. went running out like a fool and allowed a shot across his goal line early. didn't get better, stood like a statue on the first goal and was in the wrong position on the second. 4
Gamberini - someone better grab this team by the throat and sort out whatever the problem is on the road and the captain should be one who can do that. he is not fulfilling his duty, nor is he playing all that great. with both camporese and natasic dying to get in, his position is not so unassailable as it once was. 4
Natali - I'm tired of him, header straight at the goalie and hitting the crossbar may raise others opinion of him, but he's a journeyman at best and he's retarding the development of the youth that should be playing there. Rossi needs to get over the natali crush, corvino as well. i do not want this guys contract extended. two yellow cards put the team down to ten men, but it was already over 3
pasqual - should've stayed in bed with the flu, invisible - 4; Nastasic subbed in, but had no effect
LDS - if rossi can't get this guy to stay at home on defense, he should be sent on at winter break. bring up a youth player to back up cassani. 4
Behrami - only player worth a damn in the midfield like always, and yet his slightly out of control style burned the team and set up the second goal off of a free kick. he needs to play just a bit calmer 5
Montolivo - I'm tired of talking about this loser. Everyone is going to get all gaga about him because he got one shot on goal, big deal, it was right at the goalie's short side and every other shot went wide or high. He can't run a midfield. his best season was with liverani running the show, he does great with the Azzuri, cuz there's this guy named Pirlo there. get rid of him and get someone who can run a midfield. 3
Vargas - I'm done with this fool too. send him to anyone that'll pay stupid money. Every time he touched the ball, the air went out of the attack. he's slow and stupid. 3
lazzari - a back up at best, needs to go back on the bench and soon 4; ljajic - no effect
cerci - still looks out of position, weak shots, has zero relationship on the pitch with Gilardino. 3
Gilardino - started tough, earned a penalty kick that Russo didn't see and vanished thereafter; subbed for Silva 3; silva - not the answer, not serie a material, another corvino failure. Corvino will be the next to get the axe, i fear. 3

Rossi - hard to win a shootout with a gun full of blanks. 5

Looking Ahead
AS Roma comes to town next Sunday. Roma will be without Burdisso, out several months, and have several players in doubt, among them, Kjaer, Totti, Borriello, Pizarro, Borini and Rosi. Reports are out that Osvaldo punched a teammate in the face after the 2-0 loss to Udinese and he is facing a team ban of at least 10 days, so he's doubtful, as well.

Fiorentina should have Jovetic back, where he actually plays is still in some doubt, second striker instead of Cerci or maybe replacing Lazzari. Natali will miss the match, Nastasic should get the nod.