Share All sharing options for: The Pastel Derby: Palermo-Fiorentina 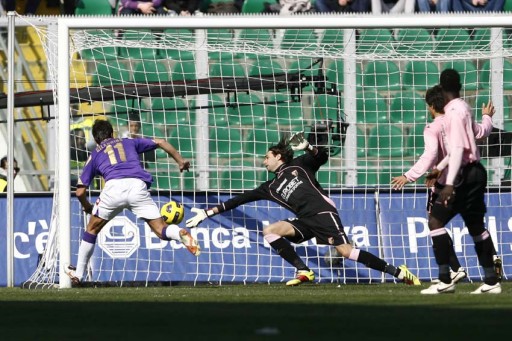 It's a homecoming for Delio Rossi as he returns to the Renzo Barbera against the team that unceremoniously pushed him out the door. It's the second in a series of tough fixtures for the embattled viola side who look to leave another positive streak in Sicily.

Delio Rossi's viola career has started off on a bright note despite the treatment room woes. Last week he ended Milan's 5 win streak with a 0-0 draw in Florence and drawing applause for his dynamism, and advanced Fiorentina in the Coppa Italia with a 2-1 win over Empoli and re-re-introducing Alessio Cerci to the fold. Tomorrow Delio returns to his old Sicilian stomping grounds to face a surprisingly agile pink side drawing acclaim for their young manager Denis Mangia. Last season, Fiorentina took an astounding 4-2 win here after having gone down 2-0 with goals from Montolivo, Ljajic, Gila, and Camporese.

Of course the injuries keep mounting. JoJo hasn't recovered from his "minor" muscle knock on international duty, and we also lost Kharja to strains over the weekend. Add to that the continuing troubles with Kroldrup and Cassani and you have a Fiorentina looking more like a hospital than a football team.

Palermo are showing great strides since their win over Inter on day 1 despite their shaky last few weeks. Last week they were steamrolled in Turin by Juve in a 3-0 drubbing, but they do have the ability to show quality where it counts. Palermo remain a strong attacking side in the talents of Fabrizio Miccoli and Mauricio Pinilla. They've found a surprisingly agile keeper in the form of Tzorvas and Silvestre has been gaining critical acclaim in defense.

Fiorentina come into this match with a 4-3-1-2 much like what we saw against Empoli in midweek. Boruc returns to his starting position. LDS takes his spot because there's really nobody else to cover for him while Natali is favored over Nastasic to partner Gamberini and Pasqual returns to his left slot. Midfield is a bit of a mystery with Vargas and Munari duking it out to cover Montolivo and Behrami, while Lazzari will slip in the hole as he did against Milan to cover Cerci and Gila.

Palermo are matching Fiorentina with a 4-3-1-2 of their own featuring Tzorvas in goal, Mantovani, Pisano, Migliaccio and Silvestre covering Bacinovic, Acquah, Barreto, and Ilicic behind Miccoli and Pinilla. Palermo will be doing without the suspended Balzaretti and the injured Hernandez, Munoz, and Budan.

The Tactical Key
Palermo are like Udinese. They thrive on the counterattack and allow the ball to get deep enough so they can quickly run it to the other side. Speed is their ally while good tactical positioning is ours. This is the game to break the Mihajlovic inspired marble statue plan, were everybody strikes a pose, and continuously holds it. Cerci seems to be adapting to his new role as a second striker and showed his ability to silently slip into the area. The midfield is going to have to hold a steady cover to outwit Pinilla and Miccoli, and with good timing and good shots, we can take home a positive result.