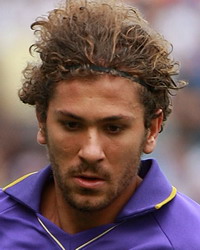 Fiorentina beat Empoli 2-1 to advance to the last 16 of the Coppa Italia at the Franchi this evening. there were bright spots, 2 goals for Alessio Cerci and some low lights, the second half defending, for instance.

New coach Delio Rossi put out a unusual squad for the tilt, starting Neto in goal, Nii Nortey Ashong at left back, Nastasic and Natali at center back and Lorenzo Di Silvestri on the right. Kharja started in the left midfield spot, with Montolivo in the defensive mid field spot and Munari filling in for Behrami. Lazzari played the forward mid field position, with Cerci and Silva in front.

Report Cards
Neto - He looks like a stick figure next to Artur, but he had 5 saves and had no chance on the lone Empoli goal. our future looks bright. 6
Natali - was a little shaky early but settled down thru the end of the first half. second half was scattered and shody for the entire squad, especially the defense. I think they relaxed. 5.5
Nastasic - really doesn't look like he's 18. I look forward to the conversations we're going to have about when to sit Gamberini, because our two young center backs are so good; 6
L Di Silvesti - did not have a good match at all. constantly beat in the second half, gave up the lone goal. 5
Ashong - struggled with his crosses early on, but he's faster and fitter than Pasqual, maybe a bit bigger too. he is our future as well. Cramped up late, camporese came on for him. 6
Montolivo - typical disjointed riccardo match. horrible passing early and yet manages to get the assist on the second Cerci goal and played better as he went on. 5.5
Kharja - pnly played half an hour, but he was all over the field, easily his best match in purple 6; Vargas - had some nice crosses, but still needs rest. he does seem to be getting a better. 5.5
Munari - think Donadel. running into people, hard fouls, kinda clumsy. 5
Lazzari - got off one good shot that needed a save and got the ball to cerci on the first score. 5.5
Cerci - man of the match - 2 goals. took him about 20 minutes to get involved, however. 7; Ljajic - got half an hour under his belt, more time than he's had all season combined. hit the crossbar on a chip and really seemed to be the only player in the second half that was really trying. 6.5
Silva - had a chance but couldn't finish. i think not scoring is wearing on him. 5
Rossi - his team was guilty of relaxing in the second half and it almost cost them, but he got the win. 6

Looking Ahead
Serie A - Sunday morning in Sicily against Palermo. Kharja and Cassani are out, Jovetic is doubtful.
TIM CUP - next match at Roma, date to be announced but it should be in December