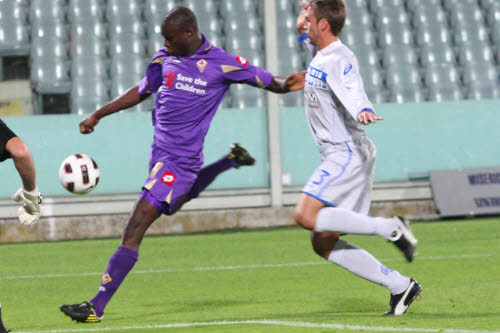 It's not the most exciting game you're going to see on Thanksgiving, but it's an important one nonetheless as Fiorentina welcome their close Tuscan cousins Empoli to the Franchi in a match that not only advances the Coppa Italia, but gives us an always welcome up look close at the youngsters.

It's time for that sister competition, the Coppa Italia and just as last year we host Empoli in our house for access to the quarterfinals. The Coppa Italia is important because the winner is allowed a ticket to Europe. Rossi's Coppa Italia successes include winning with Lazio in the 2008-2009 season, and bringing Palermo to the finals last season.

Last year Fiorentina played a full 120 minutes with Empoli capping off a sublime Babacar strike in the 118th minute.

Rossi has called up a mixed 4-3-1-2 of veterans and youngsters leaving out 5 starters: Pasqual, Gamberini, Jovetic, Behrami, and Gilardino. The only confirmed starter is Neto, covered by Gulan, Nastasic (or Camporese), Natali, and De Silvestri or Romulo. Vargas will start with Romizi and Munari while Kharja (or Ljajic) will cover Silva and Cerci.

The Tactical Key
The big danger here is familiar names Coppola (from Parma) and Dumitru (from Napoli) the cross Romanian-Italian rumored to be the next Balotelli (in what way remains to be seen) also look out for Ciccio Tavano, ex Livorno striker, and Stovini, a Florentine native who had a knack of making life hard for us when he was at Catania. Rossi has said he intends to take the Coppa Italia seriously and it won't be surprising it the second half resembles a more Serie A looking team. The question is Babacar. He's not starting but Rossi is including him in his future plans. If we put enough pressure, we can play this like a friendly.