Share All sharing options for: Fior 1-0 Genoa; Not One Of Us 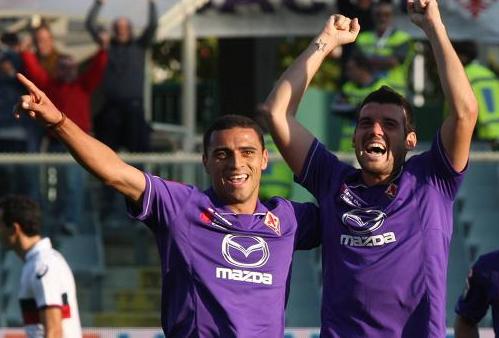 Andrea Lazzari scores his first goal in Viola and Fiorentina ekes out a 1-0 victory.

As chants calling for his firing rang down on the half-empty Stadio Artemio pitch, Viola players congratulated Sinisa Mihajlovic for a much needed win. The embattled coach, by all reports, was facing the firing squad today and needed a good performance by his squad. Whether this was the performance needed remains to be seen.

It was a typical Mihajlovic era match, one moment of brilliance and 92 minutes of awkward, disjointed play, capped off with overly defensive substitutions and which ended with la Viola holding on for their very lives. In other words, it was frustrating and ugly, words no Gigliati wants or expects to see associated with their team.

There's been talk in the press about the Gigliati being too fussy, wanting too much. I disagree. What a Fiorentina fan wants is quite simple, Fiorentina must look good. Viola fans will take a loss, as long as the squad doesn't look bad in losing. A 2-1 loss to Juventus would've been acceptable, had the two goals been given up while pressing gallantly forward against the black and white heathens the whole match.

Today is an example of the opposite. A Fiorentina fan won't like an ugly win just as much as an ugly loss. Cowardly clinging to one goal is just not acceptable and Alberto Gilardino showed that some players share that frustration as he stormed off when subbed with 20 minutes left.

But, for the time being, Mr. Mihajlovic is what we have and all that being said, the win moved Fiorentina to 10th place with 12 points and only 2 points from European competition. Notch another clean sheet and two saves for Artur Boruc.

Recap
With Valon Behrami sitting out for yellow card accumulation, Mihajlovic change the formation to a 4-4-1-1. Alberto Gilardino forward, Stevan Jovetic slightly behind and a midfield of Andrea Lazzari, Ricardo Montolivo, Houssine Kharja and Romulo. The match also marked the return from injury for Mattai Cassani.

Report Cards
Boruc - 2 saves and another clean sheet, his fifth. 6
Gamberini - solid on defense, missed his second goal from 1 yard out, although replays suggest the ball might have crossed the goal line 6
Natali - he's an old fart, but nothing to complain about today. 6
Pasqual - I think Manuel has found his Brokeback in Cassani. Cassani completes Pasqual. 6
Cassani - another clean sheet, gave up the ball once or twice, but managed to track back. had a few good runs. 6.5
Romulo - gave the ball up a bit too easily a few times, but showed a lot of pace down the side and had at least two dangerous crosses. 6; Munari subbed in for defensive purposes
Montolivo - played well, had a shot on early that Frey saved, 6
Kharja - still doesn't really fit in, but he's trying hard. 5
Lazzari - Gets his first Fiorentina goal. 7
Jovetic - just missed with a header, was involved in the score, but not as spectacular as the last two matches 6; subbed off for silva as a time waster
Gilardino - kinda out there on his own, still rusty, angry at being subbed. 5; Vargas - brought on as a fifth midfielder when mihajlovic parked the bus with 20 minutes to go, a spectacular waste of his talent IMO, but that's Mihaj for you.

mihajlovic - got the win, won the battle, but still might have lost the war. 5

Looking Ahead
Fiorentina travel for a match with the Flying Donkeys of Chievo. Chievo are in 16th place, but have 9 pts, only three back of La Viola. Chievo have done well at home, 8 of their 9 points have been scored at Stadio Marc`Antonio Bentegodi. Fiorentina have yet to win on the road, two losses with two draws and only one goal scored.