Share All sharing options for: The Calcio Classico: Juventus-Fiorentina 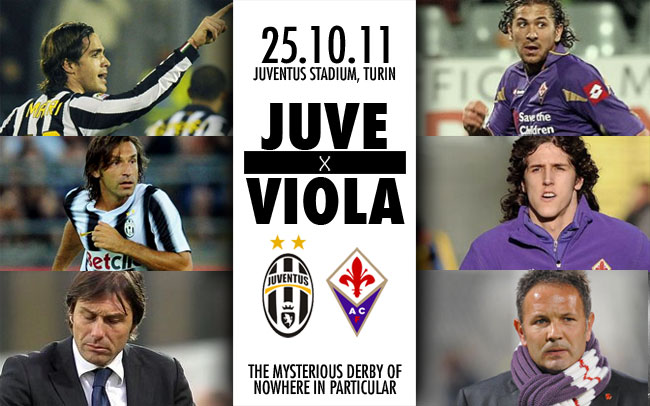 It's that time of year again. Time to wear your purple proud. Put away all the rivalry, the mercato talk, and get down to business. It's time for Juve-Fiorentina.

Unless you live under a rock, you are aware that Juventus-Fiorentina is one of the most heated rivalries in Serie A. The history of the rivalry is a long list of failed scudetto bids, mercato intrigue, and good around bad blood. A full history of the rivalry can be found in my post from last year, seen here.

So Fiorentina is off to Juventus' brand new (and let's hope stable) stadium. Juve are roaring through the season as they sit in third and are currently undefeated, but even through their laudable success they have been inconsistent in the front and in the back. Unfortunately their inconsistencies haven't yielded the same problems that ours has. Juve come off the heels of two draws against Chievo and Genoa. Their ability to score has been impeded by their ability to let wingers run wild in the lower third of their defense.

Fiorentina on the other hand come off a disappointing 0-0 with Cesena and last weekend's 2-2 sudden death draw with Catania. Yet despite the problems in the back JoJo and Cerci are still in hot form and we're boosted by the return of Gila who should have a bigger role to play this time around.

Ironically, Juventus is one of the few games where Fiorentina actually play consistently well. Juve has never been able to defeat the viola with more than one goal since returning to Serie A. Last season we opened the scoring with Vargas before suffering a late equalizer courtesy of Pepe. The last time the viola took home the 3 points was that famous 3-2 win in 2008.

Mihajlovic, who got a warning rather than a suspension after being sent off against Catania, will start with Boruc in goal, De Silvestri will still cover the injured Cassani, with Gamberini, Natali, and Pasqual. Montolivo is off due to yellow cards, so Munari will start in his place next to Behrami and Lazzari, while JoJo and Cerci will cover the still undecided Gilardino/Tanque. On the bench we have Neto, Nastasic, Romulo, Kharja, Vargas, and Tanque Silva.

Hairplug hero and dreamiest eyes of Serie A Antonio Conte features ex-man Storari in goal, covered by Lichtensteiner, Barzagli, Bonucci, and Chiellini, fronted by Vidal, Pirlo, and Marchisio, who will support Pepe, Matri, and Vucinic.

This is a classic 4-3-3 vs 4-3-3 so the match ups should be a bit more even. The pace of the midfield will be dictated by Behrami's health as he wasn't in full spirits last week. JoJo and Cerci should have enough space to run through the defense and especially cut through Lichtensteiner's side but the true focus of the game will be disrupting Pirlo. The majority of the counter and through balls come from his feet and as wonderful a player as he is, Pirlo suffers when too much pressure is forced upon him. Look out for Vidal who is quick and capable of the occasional mesmerizing maneuver. Up front the ones to keep count of is frequent viola-scorer Vucinic, and Matri, who requires bounds of space to function. The defense is going to have to be tight and compact and De Silvestri must limit his clumsiness (see: The ball bouncing off his back against Catania).

Juventus we're salivating over Vargas, JoJo, and Cerci all summer, it's time to show them what they missed out on.

Note to Juve fans: If you do decide to visit our site, please keep all banter friendly, no trolling, no personal attacks, all disruptive comments will be deleted. We appreciate keeping it a fun lighthearted atmosphere. Fair play to all and may the better team reign. Thank you. - The Fiorentina Offside