Fior 2-2 Catania; You Should Be Dancing

Share All sharing options for: Fior 2-2 Catania; You Should Be Dancing 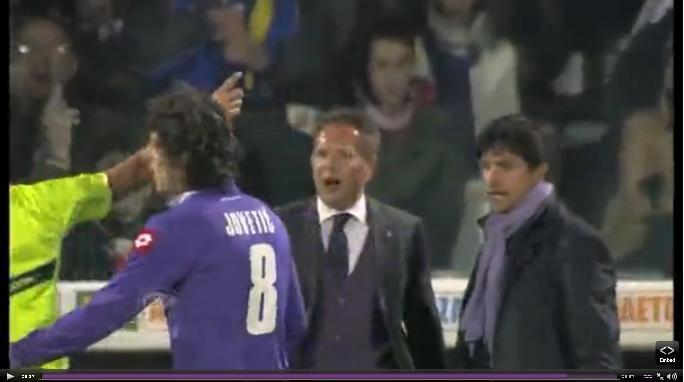 Instead, your defense gives up two weak goals and you're ejected.

Once again Fiorentina squandered away two points as a scrappy Catania side came back twice at the Franchi to earn a tie. Stevan Jovetic put La Viola ahead with trademark strikes, but questionable defense allowed equalizers each time. It's not completely his fault, but in the last two matches that Lorenzo Di Silvestri has played in (Lazio and yesterday), Fiorentina have given up four goals and lost 5 of 6 points. LDS also played in the 3-0 win against Parma.

Serie A continued it's poor performance in regards to the officiating. At least four or five handballs weren't called on both sides, one of them in the box. Silva was dragged to the ground, then given a foul and the free kick off that call resulted in a Catania goal. A weak yellow card on Montolivo will have him suspended for the next match against Juve and, of course, our fearless leader got himself thrown out to boot, so he will not be on the pitch, come Tuesday, either.

The tie leaves La Viola in 10th place with 9 points, six pts behind League leader Udinese and 5 pts ahead of relegation.

Report Cards
Boruc - had no chance on the first goal, could've done better on the second.5.5
Gamberini - as the captain, he has to take the blame for the defensive lapses, although his play was fine. 5.5
Natali - won a lot of headers, almost scored a goal, best defender on the field yesterday. I would doubt he'd be ready for a tuesday match. 5.5
Pasqual - best defender that plays as a forward, had several hookups with Jovetic. 6
Di Silvestri - as pointed out earlier, we give up goals when he plays, hoping Cassani is better for tuesday 4
Montolivo - much better match than the last match, passes went to the right team mostly. long passes were still going out of bounds. played very hard on defense as well. got a weak yellow from a crappy 6
Munari - worked hard, but just wasn't enough. 5.5; Vargas - made the pass to Jojo for the second goal, but nothing after that. he's a shadow of the El Loco we know. 5
Behrami - played his usual match. 5.5
Cerci - had some great runs, made a few players look foolish, subbed after an hour, because he got tired. 6; Romulo - came in with lots of energy, made two fine runs, had one good cross, but other passes were off target. he could be a late spark plug for this team. 6
Silva - he's really pressing, but he's working hard, he chases down balls and he's doing the physical work and frequently gets the free kicks downfield that Gilardino always gets. he will still get time as Gilardino works his way back into the lineup, i feel 6
Jovetic - man of the match 8

Mihajlovic - he had the team ready, Fiorentina dominated play early, but they got scattered at teh end of the half and gave up a late easy equalizer. Same thing in the second half, Viola dominate, get a goal, relax and give up a stupid easy goal. this has been going on since day one of the Mihajlovic Era, it's not acceptable. Getting ejected was stupid, as well. 4

Looking Ahead
At Juve on Tuesday, televised live on fox soccer channel.
No Montolivo or Mihajlovic. Cassani is still questionable