The Past vs the Future: Cesena-Fiorentina

Share All sharing options for: The Past vs the Future: Cesena-Fiorentina 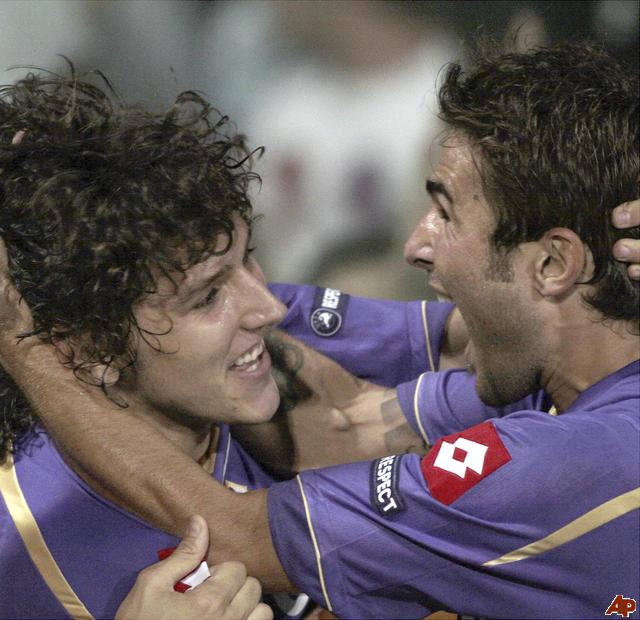 Oil, Russians, Messi, Ronaldo, or Zebra Stripes couldn't take him away from us...JoJo is viola.

So it's official, the pride of Florence remains in Florence. JoJo has officially prolonged his contract to 2016 with no buyout clause. JoJo can find no better way to celebrate then to face his former mentor and former Fiorentina hero, Adrian Mutu.

After the international break which saw positive streaks with Montolivo and Cassani's Italy, Behrami's Switzerland, and JoJo's Montenegro, and negative streaks: Vargas' Peru, and Ljajic's Serbia, the team returns to face the Seahorses on the synthetic turf.

Fiorentina come off a hard fought but ultimately dissatisfying 2-1 loss at home to Lazio, and Cesena are lingering in dead last at the table, with only 1 point in 5 days. Their latest was a 0-0 draw with Chievo that saw an increasingly irate Mutu botch a penalty. In fact Cesena have only scored two goals in the campaign thus far, and conceded seven. Last season we managed a 2-2 draw with goals from Gila and Montolivo, suffering from Jimenez, and a late equalizer from Fabio Caserta.

Mihaj looks set to start the field as he did against Parma playing his now ubiquitous 4-3-3. The formation will see Tanque return to the lineup with JoJo and Cerci, supported by Lazzari, Montolivo, and Behrami, and Cassani returns to his position next to Natali, Gamberini, and Pasqual, while Artur as always is between the posts. Gilardino and Kroldrup are still injured, Vargas has been left out for disciplinary reasons, and Ljajic returns to the bench.

Cesena will take a 4-3-1-2 with Antonioli (at 42 years old the oldest player in Serie A) supported by Ceccarelli, Von Bergen, Rodriguez and Lauro, midfield of Parolo, Guana, and Candreva, and Ghezzal supporting Eder and Mutu. Cesena are facing a catastrophic injury crisis that sees Cica, Comotto, Martinez, Colucci, Bogdani, and Martinho all sitting out.

The Tactical Key
Surprisingly the threat here is not Mutu. It's Eder, the young Brazilian who grew up in the Empoli youth system and was a favorite target for Corvino could cause alot more damage. Cesena's midfield should not be underestimated as Parolo and Candreva are both capable of mesmerizing the defense. An advantage to the Viola however is the synthetic grass, which replicates the conditions of the Franchi (widely reputed to be in itself one of the best turfs in Italy) expect the ball to move quicker and more fluidly. However, do be wary of Mutu, he is out to prove he isn't finished yet as he's done time and time again. We all know how Adrian plays, we all know he's capable of moments of brilliance, and he should never be underestimated. Mutu will play as a forward not a winger, so he'll be sitting around the box looking for service. With Cesena's fragile back line, entries into the area should be easier this time, especially with the talents of Cerci and JoJo. The key to this match is to improve what we missed against Lazio, and finish our chances with cold hard strikes.

On September 3rd 1991, a young Argentine named Gabriel Batistuta scored his first Fiorentina goal against Cesena in the 84th minute. JoJo your legend has already been written, go out there and make it happen.