Share All sharing options for: Mercato: Bits and News 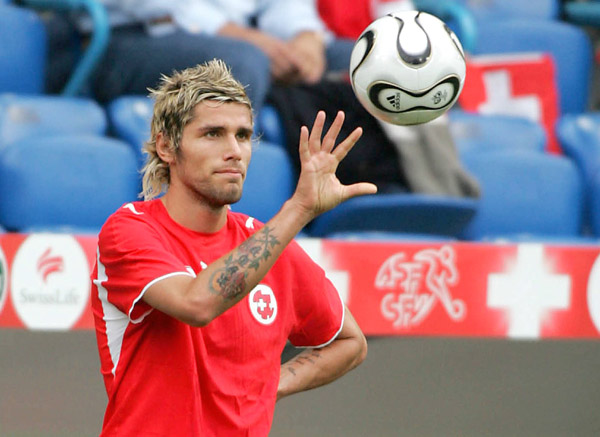 As we await the hopeful officialism of Valon Behrami's (seen here using the Force) switch to purple, its a good time to take a realistic look at the winter market.

Defense surprisingly will not be the major focus of this market. Mihaj seems perfectly happy to have an extra center d with the introduction of Camporese and he might just be what we've been looking for all along. He now takes Felipe's spot who has been demoted to shining DDV's shoes. We have just signed Brazilian international (abet second goalkeeper) Neto who looks promising while Seculin will return to the Primavera and play first string or second fiddle to Marcos Miranda. The ideal player right now would be Reto Ziegler who could spell the end of Comotto but we face competition from Milan, Genoa, and Fenerbache.

The focus seems to be on a more solid passing midfield, already strengthened with the arrival of D'Agostino but stalwarts such as Bolatti and Zanetti and a wildly fluctuating Marchionni could all bring swift exits. Bolatti and Zanetti are two very valuable bargaining chips. Bolatti is close to a number of Spanish teams but ideally would be sent to River Plate in exchange for Funes Mori. Zanetti could be sent to Parma in exchange for Paloschi or Dzemaili, while Marchionni is reportedly being courted by ambitious Malaga. For the in crowd the most exciting arrival is Behrami, a physically strong, accurate midfielder with a hell of a shot. Lazzari could be courted as a late arrival and Brighi could be an arrival if Roma (reported a few months ago) decided to take their chances with Zanetti.

The big question is: Who is going to (temporarily) replace Mutu? The names are turning and endless. Floro Flores is being cast as a possible Vice-Gila although that could go to Babacar, the dream would be Rossi who is about to extend with Villareal, Zarate seems out of sorts at Lazio, Trezeguet wouldn't return to Italy, and Pozzi is reportedly on the outs with Samp. The most plausible names here are those of Floro Flores and Pozzi (although the groundskeeper supposedly has a wonderful overhead)

This is the battle to keep our midfield together. The good news is Monty has come to terms of sorts with Corvino and a meeting is planned for the following week. Santana is up next and has undoubtedly earned his contract. While former captain Donadel is still waiting for his which is still with a big question mark over his head.

Thats the bits and bites of this years winter mercato, please feel free to throw in all the names, rumors and Goal.com "reports" you'd like.

I'll be back tomorrow night with a Brescia preview.