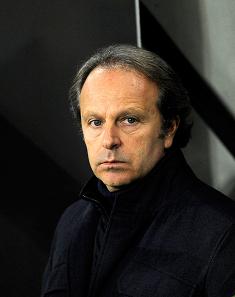 There isn't much in this world that annoys me more than Neil Young's voice on that song, but the current style of play on the road for La Viola is doing the job nicely.

Even more annoying is a lack of certainty in the Transfer market, which is particularly upsetting for those of us that feel, or used to feel, that with Corvino and The DVs we had an unique brain trust that could pull rabbits out of their hats and perform miracles that not even the larger clubs could pull off. But now poor choices last winter (Felipe), being snubbed, first by Cassano and then by Insua and now, perhaps, by Jose Angel has left a tarnish on our once shiny image and left fans wondering.

New goalkeeper Neto and maybe more so the addition of Valon Behrami should make a difference, but yesterdays match pointed out glaringly the problems this squad has in the defensive midfield and in the back field and without shoring up, the dam is about to burst.

Recap
Fiorentina came into Rome for the the second time this season to face top five squad Lazio after a disappointing home draw against Lecce the previous week. The first half started out lively enough with Alberto Gilardino getting off a header that required a save in the second minute, but a few minutes later Floccari got off a shot that required a save, and the ease with which Lazio was able to counter the Viola attack and get shots off was already apparent and foretold what was to come. The next 30 minutes went back and forth in what was not a very good display of calcio on either side, it wasn't until minute 37 that Cerci lashed a laser at the goal that required a diving save by Lazio Goalie Muslera. Lazio had on emore shot on, but the half ended uneventfully, unless you count questionable calls and yellow cards by ref Andrea De Marco which had neither side happy.

At halftime, Sinisa Mihajlov took of Adem Ljajic and brought on Gaetano D'agostino. I think this strategy was predicated on the quick return for Wednesdays game at the Franchi, but only Sinisa knows for sure. D'agostino's entry to the game brought an immediate change to Fiorentina's temp however. What was a disjointed effort in the first half, with no possession to speak of, and constant bad touches and missed passes turned into a game of control for la Viola and things began to look up.

Lazio continued to counter and Fiorentina struggled to get back but didn't give up the first goal until Allessandro Cerci was called for a foul and lost his cool and kicked the ball out of bounds. While he was getting a yellow card, Lazio started the play quickly, and Fiorentina failed to get back and Per Kroldrup pulled Libor Kazak down at the edge of the box. he calmly put the Penalty shot in and the game, for all intents and purposes was over. Lazio added the insurance goal at minute 73 and that was all she wrote.

Report Cards
Boruc - made some amazing saves, but couldn't save the penalty and was a little lost on the second goal. 5.5

LDS - Focused mostly on his defense and did a decent job, got caught forward a few times and lumbered to get back. he just seems slow. 5
Gulan - Doesn't have the forward presence of pasqual, but is much better on defense. if there was a high point of the game, it was probably him. 6
Gamberini - solid and secure on defense. 6
Kroldrup - had some shaky moments, the penalty on Kazak was as much the midfields fault as his. 5

Santana - had nice ball control moments, was one of the few to push forward consistantly. i think mario should be in our plans moving forward. 6
Montolivio - his worst game for a long time. couldn't complete a pass in the first half, once d'agostino came in and settled things down for him, then he could make passes. i wonder if he's not still hurting. 4
Donadel - played good on the defensive side, but coulndt complete passes on offense. behrami came on for him and looks likely to take his place for good eventually. 5
Cerci - other than the shot on he was pretty much horrible. stupid yellow card, didn't get back, 4; babacar came on for him, but it was too late
Ljajic - decent first half, but since the midfield couldn't walk withought falling on their faces, never got a chance to really get into the game. subbed at the half, to keep him fresh for wednesday, i believe. 5; D'agostino - made a difference in the first 10 minutes or the second half, but disappeared on the many counters. 5
Gila - invisible. one shot early and never got a glimpse of the ball after that. 5

Mihajlovic - if i were to look at this match in a singular fashion, i'd give him a 4, but i think that the lineup he fielding was due to having to play genoa wednesday, and if he gets the 3 pts there, then that lessens the hurt of this defeat for me.
so i'm going to see what happens wednesday before i start calling for his head.

Looking Forward
The loss and other results leave La Viola in 13th place 5 pts above relegation and 10 pts behind European Comp.

Wednesday at the Franchi with Genoa. pasqual will be available and will probably start, might have a comotto sighting and let's hope to all that's holy we have a Mutu sighting.

There is 1 day and 2 hrs left in the mercato and there is still hope, albeit very slim for some help.