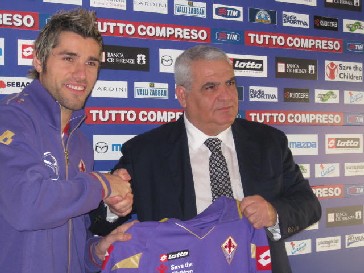 First game for new boy Valon Behrami in purple and he plays directly as an ex-man. Time to take our game to the devious Stadio Olimpico.

Its been a turbulent week of restructure and re-establishment within the team. Mutu fires his agents and tries to get back, we're reeling from yet another deluded market where Valon was our only real buy while we sit in the back and watch our transfer targets drift right over Florence, usually bound for the Ligurian cities. Our match last week was utterly forgettable in every aspect, with an ugly 1-1 draw against Lecce. Alas we come to a badly bruised but difficult Laziale side. Lazio has thus far registered a single win in 2011, and are coming of a 3-1 smackdown by Bologna.

Lazio are in a medical crisis, out are: Dias and Zarate who are disqualified, and injured are: Bresciano, Del Nero, Rocchi, Meghni, and Garrido. The usual suspects are out for us, Pasqual faces a 1 game suspension and will be replaced by Gulan, while Vargas, Natali, Frey, and JoJo are all improving. Mutu is still not training with the squad but could return next Sunday.

We're going for a 4-3-3 much like we saw against Lazio, ex man LDS, Gamberini, Kroldrup, and Gulan will back up Boruc. Donadel, D'Agostino, and Monto will hold a mildly defensive midfield, and Santana will start ahead of Behrami with Ljajic on the other side backing up Gila.

The Eagles will play a 4-4-2 with Muslera in goal, Lichtensteiner, Diakite, Biava, and Radu in defense, Gonzalez, ex-man Brocchi, Ledesma, and Mauri in mid, and Kozak and Floccari picked over Hernanes.

A win would be obviously the most favorable result, but lets hope for at least a draw.