Share All sharing options for: Fior 1-1 Lecce Everything's so blurry... 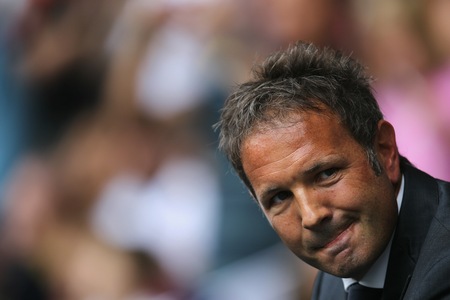 ... and it's not just the lousy streams or the blow to the face i took from my face plant on black ice.

Sinisa Mihajlovic might be feeling a bit like Damacles with a squad that under-performs against the teams they should beat and can't seem to find a win on the road with, naturally, two away games looming, one at Lazio and the other at our favorite Sicilian paradise, Palermo.

Also adding to the Blur-ified atmosphere is a dithering Management that just can't seem to make a deal, any freaking deal, or even dispute any rumor that's out there, bring a state of uneasiness and uncertainty to areas of the squad that might feel in danger.

To add a cherry to the top of our Puddle of Mudd, members of the squad were seen out late midweek celebrating with persona non grata Adrian Mutu and Juan Manuel Vargas was in an alcohol related accident at dawn on Saturday, although he was not driving or injured. I expect a rather severe response from the DVs to both the antics and the poor performance.

Recap
The match started off lively enough, as la Viola had two shots in the first 5 minutes, Adem Ljajic and Gaetano D'agostino both missing the net wide, but Lecce looked dangerous on the counter and by the 16th minute, Di Michele had an excellent chance but put it wide. On the 24th minute, Fiorentina goalie Artur Boruc was required to make one of his 3 saves on a header, also by Di Michele

At minute 29, Ruben Olivera, much to the delight of the 23 Giallorossi fans in attendance, headed a ball and ran past a clueless Lorenzo Di Silvestri and served it through the rest of the sleeping Viola defense to a wide open David Di Michele who put the ball past Boruc for the early lead.

Things looked nothing but worse as a horrible Manuel Pasqual tackled his man in the box, but Di Michele put the penalty shot high and hit the bar.

(I'm going to interrupt this recap for a moment of Hate)

Manuel Pasqual has to go, not to the bench but away from the beautiful city of Firenze.

Besides giving up the penalty shot, he was a total black hole on offense and swiss cheese on defense and when being whistled by the fans, quite rightly in my opinion, he had the nerve to put his finger to his lips in a shushing motion.
Every ball he served was out of bounds or to a defender, he let his man past him time and time again and then he disrespects the fans. Time to go.

Ok, back to the Recap
Donadel got a shot off before the half, but it was blocked and both teams went off the pitch with the visitors up by a goal.

It took 6 minutes of the second half for Fiorentina to equalize, however. Montolivio earned a corner, took the corner quickly, got the ball back and served a nice ball into the box, which was headed by Gamberini to Gilardo, who put it in the back of the net.

The rest of the half was a scuffling mess as Mihajlovic brought on Babacar and Cerci and later Bolatti for an injured D'agostino and lecce used their 3 subs for time wasting and neither squad had much of a sniff at the go ahead goal.

At minute 87 Santana had a shot saved and Lecce looked to have a chance with a corner in the last minute, but they took too long and the referee, who was doing his first Serie A match and did quite well, in my opinion, blew the whistle for the end.

Report Cards
Boruc - slightly out of position on the Lecce goal, but the defense was so horrid, you can't really blame him, guessed wrong on the PK, but the wood saved him. Nearly took off LDS' head, but he socked a lecce player with the other arm, so it's ok. 6

Pasqual - Hang him from the Palazzo Vecchio ala Hannibal - no speed, poor tackling, unable to mark opponents, can't serve the ball, gave up the PK. 2
LDS - poor defending, looked slow, had some presence on the wing, but nothing really exciting. ho hum 4
Kroldrup - no confidence with the ball, constantly passing back. at this point of his career should be a back up only. 4
Gamberini - left Di Michele alone for the goal. if he's the "defensive captain" he failed along with the other players. extra half point for finally standing up and taking a ball away from someone. 5.5

Donadel - lots of effort, nice shot needed saving, but gives balls away too easily and then fouls, got a yellow. 5.5
Montolivio - Had a poor first half, with the exception of a back heel that released Ljajic for a shot, every back heel from the entire squad failed after that one. Tries to be a bit too cute for me. Second half was better, controlled the ball better and made some nice passes. took a ball into the box and served a pass that really should've been a goal, but just seemed to sit there. took a knock and was subbed out as a precaution. 6; Cerci - fell over a few times and got a mention for his floppy hair, other than that not a factor.
D'agostino - big step back. couldn't pass, couldn't hold the ball, shots were high and wide, diving, fouling, getting fouled and finally cramping up once then getting tackled and going off the field without putting pressure on his leg. 4; Bolatti - invisible n/a

Santana - had some nice runs, was moved back to midfield when Monto went out. solid as always, 6
Ljajic - I love the lad, but he's in over his head. one stunning moment every two or three matches doesn't make up for 7 balls given away. takes too long to make a decision, needs to stop thinking and just play. likely to sit for a spell if rumored deals happen. 5
Gilardino - shows once again he's ready to score if someone can just get the damn ball to him, course it has to be with his head as his feet have seemed to disappear. 6.5

Mihajlovic - did not have the lads ready to go from the start once again for a big match against sub par talent. on top of that his players are causing problems out on the street (vargas) and on the field (pasqual - shushing motion). managed to find a way to inspire his players at the half, but all three subs were puzzling and did not affect the game what so ever. 4

Looking ahead
This match and other results left us still in 11th place with 25 points, but we're now tied with Parma and Bologna and only 1 point ahead of Genoa and Chievo. Next Saturday on the road in Rome, against Lazio (not Parma, my bad), followed by a midweek clash at the Franchi against Genoa.