Share All sharing options for: Fior 0-0 Napoli - Takin What They're Givin... 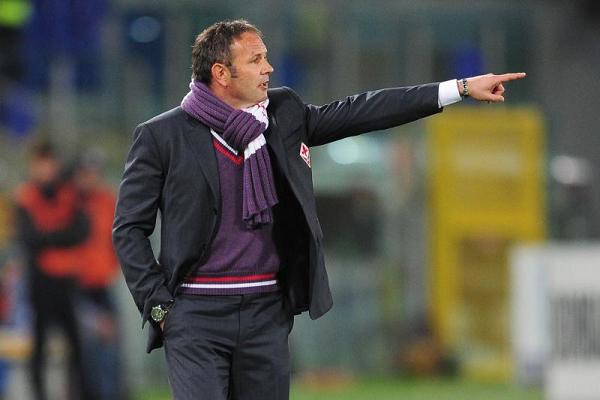 Even Huey Lewis knows it can't be flash and glitter all of the time and that sometimes you just have to roll up your sleeves and do what it takes, and that's just what Mr Mihajlovics Lads did, as Fiorentina went under the shadow of Mt Vesuvius and held second place Napoli scoreless. In what was, in my opinion, a fine tactical plan by the Serbian, La Viola held the newest Neopolitan volcano, Mount Cavani, dormant and without eruption.

Napoli had been flying along after beating Juventus 3-0 at the San Paolo the previous week and have only been held scoreless once before, on the road at Lazio. Fiorentina were coming off a horrid first half against relegation challenged Brescia in which they gave up two goals, but managed to storm back and garner three goals to save the day.

Recap
Fiorentina deployed in a 4-3-3, but dropped Ljajic and Santana back into a 4-5-1 when they lost possession of the ball, so actual chances were at a premium.

Napoli fans were in fine voice as the match kicked off, and the Partenopei responded well, taking the match to Fiorentina immediately, and in the third minute, Mount Cavani had it's first shot at an eruption. Sosa fed a nice through ball to Cavani, who was all alone in the center of the box, but instead of a rumble, Mt Cavani let out a nacho-like grumble and shanked the ball up into the stands.

After another three minutes of Napoli pressure, Viola fans had to believe they were in for a long day, but in a surprising turn of events, Fiorentina began to settle down, held onto the ball and began to slowly move forward and took the game to Napoli for the rest of the first half.

At minute 20, Fiorentina had a great chance, but Marco Donadel just missed to the left of the net, at minute 30, Mario Santana had a shot blocked, at minute 32, Manuel Pasqual had a shot on saved, at minute 39 Adem Ljajic did his own Nacho impression, at minute 44 Santana had another shot requiring a save. it wasn't until the last minute of the half that Artur Boruc was called into play as he saved a shot from Gargano.

As the halftime whistle blew, however, it was plain to see that the effort in the first half had expended a great deal of the teams energy and Sinisa Mihajlovic probably took that into account as the team came out with an entirely different attitude in the second half.

With rarely more than one man in the offensive end at a time, La Viola seemed to tell Napoli "you took our best shot in the first half, now give us your best shot" and packed it back for the bulk of the second half. There were shots from D'agostino, Donadel and Babacar, who came on late for Gilardino, but, for the most part, Fiorentina concentrated on keeping Napoli out of the box and out of the scoring column and took home the one point.

Report Cards
Artur Bowroots- solid when he needed to be. looked a lot more comfortable. 6

Di Silvestri - This could be his coming of age game. he ran forward relentlessly in teh first half, he marked back strong, in the second, he shut down his side for the most part. 7
Gamberini - solid, shut down Cavani. 7
Kroldrup - solid, held his center and helped out pasqual. 7
Pasqual - had some decent crosses and played well forward, but looked a bit uncertain getting back a few times. 6.5

Donadel - put in a yeomanlike performance. not always pretty, gave it his all. 6.5
D'agostino - sacrificed most of his offense to mark back. still needs to find some fitness. 6
Montolivio - got kicked in the ankle early and struggle a bit for the rest of the match. was taken off for a more defensive minded Marchionni; Marchionni just played back. n/a

Santana - strong in the first half, had some great ball control moments, had a few chances, but hardly seen in the second half. 6.5
Ljajic - played like a man possessed in the first half, much less in the 2nd. missed a good chance. 6; Bolatti - n/a
Gila - went down in the box early and didn't get the call and seemed to pout about it the rest of the half. non existent in the second half, replaced by Babacar 5; Babacar - by himself in the 2nd, not too effective, but gave all he had

Mihajlovic - I think he played the perfect chess match here. had an excellent early game plan and sensed that we couldn't keep it up the second half and that Napoli was off their game and packed it back. Subs were ineffective offensively but kept the sheet clean, which was the major objective. 6

Looking Forward
The result moved Fiorentina to 11th place in the table, 6 points from relegation and 8 points from European participation.

Next week is a must win at home against Lecce. After next week we have 3 of 4 matches on the road, against Lazio, Parma and Palermo with a home match against Genoa sandwiched between Lazio and Parma.

Hopefully we might have a Juan Manuel Vargas sighting, and Natali should be available if necessary.