Share All sharing options for: How To Save A Life - Fiorentina 3 - Brescia 2 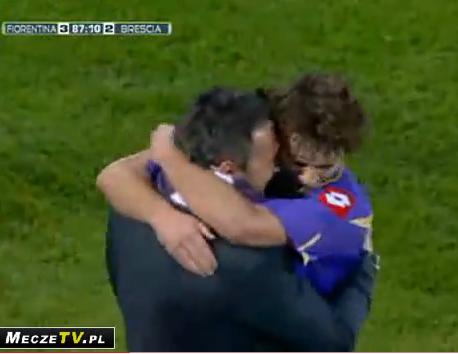 It wasn't The Frey that saved Sinisa Mihajlovics Florentine life, it was Alberto Gilardino, Mario Santana and Adem Ljajic.

It was a contest of contrasts, with a first half full of everything that frequent viewers have come to hate about the current version of la Viola, playing down to their competition, not marking the dangerous players, giving up silly fouls deep in their own end, no cohesion between any offensive player, this one had it all and after going down at halftime 2-0, the look on the owners face said everything that needed to be said. But the squad came out with a much different attitude in the second half and turned it around and saved Mr Mihajlovic from the unemployment lines and provided some welcome relief from off field distractions.

Recap
It took half an hour for Manuel Pasqual to forget he was a defender and just let his man take a shot that went in.

Shortly before the half, Alessio Cerci was stomped on and had to leave the field. If his screaming was any indication, he's probably the latest in an injury plagued season. His replacement, D'agostino, came on the field and immediately fouled a man right outside the box and it led to another goal.

In the 72 minute, Montolivio served a perfect ball for Gilardino

in the 86th minute, Santana put away a rebound from a Babacar shot

and then one minute later Ljajic took a perfect pass from gila, took a deep breath, got the ball on the correct foot and buried the shot. I'm very impressed with his calmness

Shots were fairly even, 20 to 18 for Fior, although ELEVEN shots were on for la Viola, while only 4 were on for Brescia.

The win raises Fiorentina to 12 place.

Report Cards
Boruc - Looked shaky to me in the first half, although there wasn't much he could do on either goal. wasn't called on for much in the second half, 5.5
LDS - Still trying to find himself, wants to play forward. 5
Pasqual - He is the weakest link 4
Gamberini - he wasn't at fault for either goal, played solid 6
Camporese - he wasnt at fault either for the goals. can only get better 6
Donadel - painful to watch, couldn't pass and made a lot of rash tackles. 4; Ljajic - lot of give aways, pretty ragged until the last few minutes then flashes of the brilliance we expect from him. 6.5
Montolivio - hard to watch in the first half, real bad. seemed to find his confidence, controlled the ball and served the ball with an accuracy to Gila on the first goal that had been sorely lacking in the whole team until that point. 5.5; Marchionni served the ball that gila tapped to Ljajic for the winner 5
Cerci - played pretty well until the injury, took a ball around two defenders in the box, althoug he couldn't slip a pass through for a shot 6; Dagostino gave up the foul that led to the second goal, but was a strong force in the attack for the Viola in the second. 5.5
Santana - almost snuck a long shot past the goalie but was wide, pounced on a rebound and put it int he net for the tying goal. 7
Babacar - still learning, had a few shots on, one which led to a goal 6
Gialardino. Looking more like the scorer he is 6

Mihajlovic - call him lazerus. i'll give him a 7 for winning the game and forget the first half.

Looking ahead
Away to Napoli, with Marik Hamsik sidelined for yellow cards, it could be a Viola Debut for someone from West ham or Brazil
or who knows where