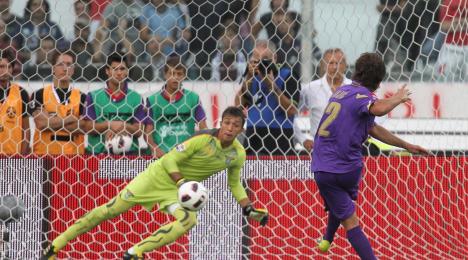 This day was a tale of two songs for me. It started with a soundtrack of "Like the Weather" by 10,000 maniacs...

"What a cold and rainy day.
Where on earth is the sun hid away."

The first half was grey and overcast, dreary and rainy. The coach was soaked on the sidelines and both teams seemed mired in proverbial mud. Lots of whistles and lots of back and forth with only 3 shots total. Fiorentina did the bulk of the attacking, but there really wasn't much dangerous happening.

During halftime, something shifted. The rain stopped and bare chested gigliati (male, more's the pity) were spotted in the stand at the Franchi, and Mr Mihajlovic strode out of the tunnel with his hair towelled dry and a fresh shirt, ready to get to work, and work his lads did.

Second half was all viola, Lorenzo Di Silvestri, Juan Manuel Vargas, Monto, Donadel, Cerci, Ljajic and our man Gilardino worked like dogs, crashing forward while Parma hung on, literally. in the 15 minutes before the first goal, Gilardino was awarded 3 free kicks in the attacking third, with the fourth foul being in the box. Ljajic calmly stepped up and buried it.

Mihajlovic's first sub was Nikola Gulan for Felipe. Gulan is a 21 yr old Serbian that we acquired in 07 from Partizan.
I thought Gulan did ok, especially since Felipe was his usual awful self. Felipe played far forward, like pasqual, and had even less ability to get back. a pass he had blocked almost cost us a goal, he had several bad fouls including one that injured a player who eventually had to come off. he was lucky to not get carded. I really think he should be considered a last resort.

Our second goal came off a lucky deflection from a LDS shot, but given the work we had put in, I thought we deserved it.

I'm a hard, hard workin man
I got it all on the line
For a peace of the promised land
I'm burnin' my candle at both ends
'Bout the only way to keep the fire goin'
Is to outrun the wind

Mario Alberto Santana made his season debut after the second goal for Vargas, who looked a little winded, he had put in a lot of hard work. We saw a slimmed dwon version of Mr Santana, some comments were made of his lack of portliness. Bolatti came on late for Ljajic, but the rest of the match was really just parma trying to get one goal back. Fiorentina managed to do something that they hadn't down since March... CLEAN SHEET!

Report Cards
Frey - Solid. faced seven shots, made two saves and kept the clean sheet. 7
Natali - had a solid first half, made a mistake in the second, but was ok 6
Gamberini - solid, grabbed his knee at one point, probably still has a way to go for full fitness 6
LDS - had a mixed day. he whiffed on a ball in the box that could've cost a goal on felipe's bad rebound shot, but played well forward, his delflected cross went in for a goal. got caught ahead a few times. 6.5
Felipe - he's just garbage, about 5 bad fouls, one of them causing an injury, he played too far forward. kicked a cross into his defenders legs in the attacking third so hard it rebounded all the way back to OUR attacking third, 4
Donadel - typical donadel give it everything effort, some bad fouls but some great passes too. solid 6.5
montolivo - woked hard int he first, but seemed kind've ragged, might have been due to his ankle. better in the second, had a pretty move and a nice shot which required a good save. 6.5
Vargas - worked his butt off on both ends of the field. he's involved in the attasck, he's crossing great, the one down side is most of his shots are flying over the goal. he served the ball gila got the penalty on. 6
Cerci - lots of hard work, great passing, not so great finishing. weak shot 5.5
Ljajic - lots of hard work, great passing and ball movement. looks the most dangerous of all viola players, at this moment. 7
gila. he's the one with the hard hat. he's not pretty, he's not scoring tons of goals, he has issues staying onsides, but this win doesnt go in the books without this man. 4 free kicks and the penalty in the space of 15 min set us on our way. 7

subs
gulan - didn't make any mistakes, wan't horribly tested either 6
santana - looked ok, had some decent crosses . welcome back!
bolatti - on for ljajic at min 90, really more of a holding move or maybe to get adem some applause. n/a

mihajlovic - his changes to the lineup and formation are working. he had the lads ready to play, they didn't give up the early goal, or any goal for that matter. his substitutions all worked out i give him a 7

Moving Forward.
Need another win next week, We're tied with Palermo at 5 pts. They have a thursday Europa match in Switzerland, we have a week to get ready.