Trying To Get It Together- Fiorentina vs. the Cheeseheads

Share All sharing options for: Trying To Get It Together- Fiorentina vs. the Cheeseheads 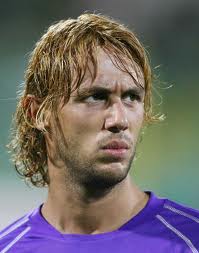 Ah, Parma. One of the Cinderella stories of Serie A. Once under the Great Man they were the toast of the 90's making waves both domestically and in Europe. Half our team came from them, and they produced the "big names" that earn ridiculously high wages today.

I call them the cheeseheads not as an insult, but as an ode to their wonderful history of Parmesan cheese and Prosciutto ham. But on the field its us who want to dominate this week.

I put Donuts in the spotlight this week, not just because of his Parma history, but because I think he's taken a lot of flak lately and he still has some fans (this one) who knows that rocket of a foot is hiding somewhere. Our team is made up of 5 ex Parmesans (Frey, Mutu, Gila, Donuts, and Marchionni) and hoping the law of ex's works both ways we can use it to our advantage.

Last season we played a tough game that ended in a 3-2 win for the cheeseheads and even a Gila double couldn't save us. The year before that, Parma was our saving grace that allowed us to overtake Milan and gift us the champions league.

So heres what's going on for Sunday, the team looked a lot better in midweek and the 4-3-3 actually seemed to somewhat function even though it was a spectacular Seba who proved why exactly we need him. We aren't the team to beat, but we can come out of this if we keep pushing and being aggressive. Unfortunately we're buoyed once again by injuries. Pasqual picked up a knock and has to be filled in with Brazilian liability Felipe, and D'Ago is still out but both should return for Palermo. Miha is supposedly planning to shake up the midfield and go for a Montolivo-Bolatti-Donadel lineup, while Cerci is being preferred over Ljajic.

Parma's woes are a knock to Giovinco who will be out for 4 weeks along with continuing injuries to Galloppa and Paloschi. Ex-man Bojinov will start alongside sellout Crespo and expect to see our beloved ex-man Gobbi in mid. Antonelli will start from the bench as he hasn't been impressing lately.

This is a MUST WIN for our morale and to get our season back on track!