The Eaglets are Coming to Town- Fiorentina vs Lazio

Share All sharing options for: The Eaglets are Coming to Town- Fiorentina vs Lazio 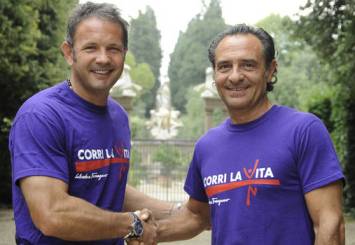 So our season hasn't started off in the best of ways. Screwed by refs, a team decimated after one injury after another, and morale isn't too high at the moment. So we're hoping Miha was able to give the boys a nice kick in the pants over the week.

This week the Biancocelesti are coming to town. Last season's matchup ended in a disappointing 0-0 draw where Gila had a perfectly good goal disallowed for "not crossing the line." Lazio at the Franchi is always a tough one and I can't remember any recent time we've beaten them with over 1 goal there. The good news is Vargas and even Gamberini is back, so lets have a booster for the defense. I'm still undecided wether i'd have Kroldrup, who has been very solid lately, or Natali who is in fact somewhat decent. Heres to hoping Felipe accidently slips and falls and spends the next 6 months far away from the pitch. Vargas was much missed and Marchionni just couldn't cut it on his side, but word is Marchionni might be soon losing his spot to Cerci whos been highly impressive since starting and seems a natural fit into the team. Gila needs to learn to take his chances, if you have a wide open shot, than shoot, don't try to dribble around. On to our midfield, if Montolivo is going to be a leader (personally I think the natural leader of this team is JoJo or Frey) he needs to be more solid, missing a simple kick last week was unacceptable. Lets hope this team gets it together soon.

So some other tidbits this week

Gila is going to become a father for the second time

Natali has recovered but hasn't trained with the group while D'Agostino is being evalutated.

Santana has fully recovered and will start from the bench

Matuzaluem and Floccari are out for Lazio, Zarate isn't in the best of form so Rocchi will start.

Vargas is asking Fiorentina to hold a friendly in Peru against his former team Universitario, who are currently deep in debt.