5 Things we learned from Tottenham-Fiorentina, and game recap

Share All sharing options for: 5 Things we learned from Tottenham-Fiorentina, and game recap 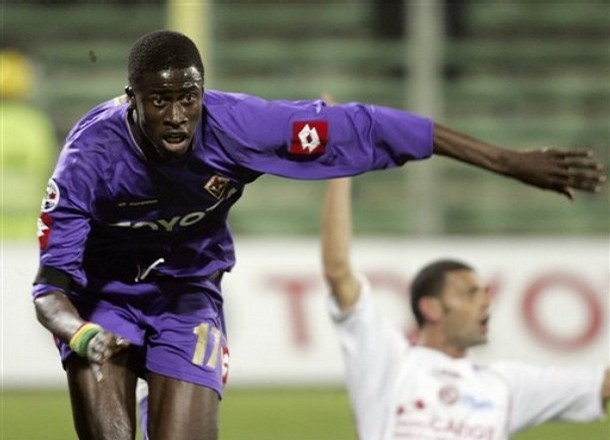 So Tottenham-Fiorentina was our first major friendly, and although the boys played well they just weren't able to hold the pressure and succumbed to a late Robbie Keane strike that left us 3-2 but leaving with heads lifted. Did we play bad? No, we played well, our defense (historically our biggest issue) was our weakness. So heres 5 things we've learned and hopefully can improve on:

1. Papa Waigo is a workhorse
I have to hand it to Cool Papa and begging Corvino not to loan him out again. The man came back to Florence with a passion to play and didn't stop running until he was subbed for Agyei. He shot a superb cross in the opening minutes that found Gilardino for the opening goal. Miha has been most wise to keep him, and he might be our secret weapon this year...and we're all waiting for THIS!

2. Comotto should never touch a football again
In the beginning I was a big fan of Comotto, I thought the man had rocket attached to him whenever he started to run down the flanks. But alas hes exactly what this team DOESN'T need. Constantly out of position (pass the ball and get back, don't stand up near the goal, stay near our goal) gave the ball with a weak pass that led straight to Pavlyuchenko's tying goal. Please Corvino, we really need someone who can step it up more than Gianluca can.

3. Can Monto and D'Ago really play together?
As slakas pointed out, the Donadel Zanetti line held more than the Monto D'Ago line who supplied more useful balls. Now heres the problem, do we want coverage or passing? Obviously Monto and D'Ago are two players who don't want to stay sitting on the bench, so we need to find a quick solution to incorporating at least one of the d-mids (Zanetti or Donuts) behind the two midfielders. My solution would be to have a three man midfield with D'Ago and Monto upfront and Zanetti behind. While i'm on the subject. Marco, man...what happened to you? Up until last season you could pound balls in from the Franchi parking lot if you wanted to, now you're just losing balls, kicking it around with no purpose, and generally look like Ronald McDonald's recently rehab'd cousin. (lose the ridiculous mustache too)

4. Ljalic is just as promising as JoJo
I'm not going to lie we we're missing JoJo today. He holds the team together and is the flag of this team. I was hugely impressed with his workrate, he can dribble, he can shoot, he can sneak past entire defenses and he found himself ready and in the right spot when he needed to be. He had a wonderful shot on goal to pull us into the lead and judging from his pre-season form (7 goals in 3 games) this could very well be Adem's revelation year as last year was for JoJo.

5. Gila is still Gila
Finally a last word for the big man. Gila does get alot of flak, most of it undeserved at times. I don't think he's the villain that he's portrayed as especially after a dreadful world cup that (in a team that was 80% Juvemerda) people judge him as the flopping, crying primadonna. Lets face it, he is possibly the best header in Serie A. He's deadly, he doesn't create much of his own chances, but he towers over defenders and takes any opportunity that he can. I know very few people other than Florence are going to ever show him the kind of respect that he deserves but well done on a cross from Il Papa. Heres to many more this season.

Bonus: 6. Miha is slowly turning this team into his own
Yes one more bonus point for Miha. We saw the differences between Miha's purple and Prandelli's purple. As one of our commentators once said (forgive me if I can't recall who) "If Prandelli was the father figure to the team, Miha is the warrior." Although our defense had holes bigger than Zanetti's bald spot, we saw 11 men running behind each ball, and throughout the first 20 minutes we had backed Tottenham into a corner and absolutely everybody from Donuts, to Gila, to the Franchi groundskeeper weren't letting Tots get past midfield. If we can play those first 20 minutes all season I believe we'll do well.

So here are my rankings for the match

Frey: 7.5- Wonderful save on the freekick, still the Frey we know and love, but could have been a little farther back on Keane's first goal.
Comotto: 4- Absolutely dreadful match, lost balls, couldn't move forward, and responsible for the first goal.
Natali: 6-I like Christmas, hopefully he'll turn out to be the tall one we've been missing since Dainelli left, but needs to be more aware of his surroundings and find the man who actually has the ball.
Felipe: 5-At Udinese Felipe was a capable defender, now he just seems lost most of the time and nearly always run over by bigger people. Lets hope he learns to head a ball away from the goal before the season starts.
Pasqual: 6- Pasqual used to have a rocket of a left foot, now he looks like the lost puppy who needs to be told where to go. Like Felipe he seemed to be overrun constantly but unlike Felipe, hes capable of moving a ball forward, thus the extra point.
Donadel: 6.5- Donuts was a little more capable for the defense and still moved the occasional ball forward, but suddenly the once classy midfielder has taken a page from the Melo school of Douchebag and turned reckless, running into people and becoming card fodder.
Zanetti: 6.5- Same as Donadel except somewhat more competent. Earned himself a needless yellow card, seemed to give away too many freekicks, but at the same time able to control the pace of the game. If he turns into the man we saw against Liverpool we'll be set for the season.
Papa Waigo: 8- Finally a positive note, and I saw full heartedly welcome back cool Papa! Started running at minute 1, and didn't stop until subbed by Agyei. Served a wonderful cross that found Gilardino for the opener and was unluckly not to find the goal himself. Our secret weapon this season.
Ljalic: 8-Showed all the reasons why hes the next big Serb happening. Dribbles, crosses, runs, and a goal, always in motion, uses his size to his advantage, well done.
Marchionni: 7-Fights for the ball, runs, and a perfectly delivered cross for Ljalic, nicely done.
Gilardino: 7.5- Opened the scoring after just 3 minutes with a classic Gila header, but I wish he would be more active in the game instead of just poaching whatever happens to be there. If he finds his groove again, we'll be set.

Subs: De Silvestri: 7-immediately an improvement over Comotto, made me feel much more secure on the right and gives us the same advantage of defending and passing that the left side has.
Montolivo: 6.5-Our capitano is still on vacation and it shows, needs to get back into the form we saw of him last season. Nothing to worry about yet, but if he can show the work D'Ago does than we'll have a more complete midfield.
D'Agostino: 7- Good start for D'Agostino, fast runner, and filters the ball to where he wants it to go even if 3 defenders are watching him. Fixes Montolivo's mistakes.
Kroldrup: 6-Not much of an improvement over Natali and left Keane wide open when it came to the winning goal, Gambero where are you?
Babacar: 6.5-Baba didn't show the fancy footwork that hes become well known among the viola-faithful for, but constantly found himself in the area and came within mere inches of finding a goal served from his fellow countryman.
Avramov: 5- Just not, never been, and never will be the goalkeeper for this team, too bad Boruc was injured today, but Avramov needs to find himself a smaller team, didn't find himself ready for Keanes goal and doesn't have Frey's reflexes.
Gulan: N/A. Other than touch a few balls when he first entered didn't really see much of him after his first 5 minutes.
Agyei: N/A. Came too late in the match to make a real difference.
Bolatti: N/A. No real contribution good or bad to this match.

Miha: 7.5- Has turned this team his way. Wants the boys to attack and defend constantly but needs to get his midfield and defense sorted out and needs to do it fast.