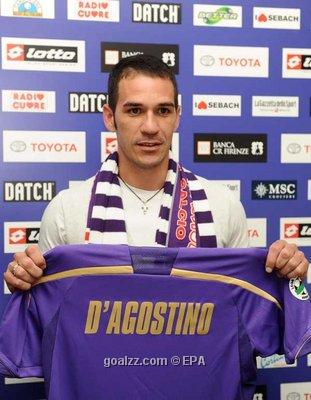 I borrowed the headline from a bunch of lads from Our Man Ted's neck of the woods because it sure felt like last year all over again at the Franchi against Napoli.

In Sinisa Mihajlovic's debut in lovely 73 degree Firenze, bad defense and even worse officiating in a crucial situation resulted in an early goal, and La Viola were forced to play from behind until the 49th minute, when a blast from lately acquired midfielder, Gaetano D'Agostino, cleared the net to equalize the situation. A head butt from "Peruvian warrior" Juan Manuel Vargas resulted in a red card, and will probably also result in a suspension or two. All in all, a point from this is probably a good result.

Recap
Fiorentina took the opening kickoff and possessed the ball for the first five minutes or so, but, on a counter from Napoli in the 7th minute, Lorenzo Di Silvestri couldn't get back and allowed a cross to a Cavani who was just wandering around in the box. He headed off the crossbar and onto, NOT across, the goal line. Neither the head official or the linesman had any chance of seeing the ball, and yet gave the goal.

The rest of the first half was mostly Fiorentina possession and attack with a few mild Napoli counters. There were two types of attack in evidence. The first style, which we're all used to, was to launch a long ball and hope vargas/gila/marchionni could catch up, while the second style was sharp crisp passing and quick stabbing runs. The first style was largely unsuccessful, as usual, while the second style worked very well in the middle of the field, but fizzled out in the attacking third as a player would hold the ball too long and run at the defense (vargas) or charge and cross out of bounds (marchionni). There was a lot of chippy play and the fans were really on the ref for what they saw as a bias towards the visitors. Gila went down in the box twice, at least one of those would've been a foul at midfield. In extra time, however, Napoli got a corner and frey had to make a vintage, sebastian frey, wunder save. going one way and reaching back the other and getting a hand on the ball behind him.

Second half started out with more of the same, Fiorentina possession, utilizing both style 1 and style 2. At the 5th minute, the long ball style paid off. A deep ball from Monto, was collected and fed by Gila to D'Agostino who made no mistake from outside the top of the box.

The next 18 to 20 minutes were back and forth without any real threats on either side, although Fiorentina had the better of possession, IMO.

At the 68th minute, Juan Manuel Vargas, who had been fairly contentious through the match, reminded me a lot of one, Felipe Melo, as he had several rash fouls called on him and then finally got in a tussle with Hugo Campagnaro and head butted him. Campagnaro got the yellow, Vargas the red.

Being a man down didn't seem to faze La Viola as they continued to press on and finally caused (marchionni) a second yellow by the Napoli defender, Blasi. The rest of the match passed fairly uneventfully, with the exception of the new kid on the block, Alessio Cerci, getting some PT.

Report Card:
Frey - one goal that wasn't a goal away from a clean sheet and a wonder save. a typical solid frey performance. 8
Pasqual - invisible in the first half, little more presence forward in the second half but kind've slow. 6
Natali - invisible except for 2 stupid fouls. also left cavani open for the goal that wasn't. 4
Kroldrup - had a few good plays on defense, got a yellow card on a lunge (after being tugged on, to his defense) 5
LDS - LDS is an awesome winger. unfortunately he's supposed to play defense. his side is wide open for counters and the middle can't get back fast enough. 4
Monto - slow start, had a few early turnovers and kicked a few balls out of bounds. settled down later and kept possession very well. most of the good ball movement in the middle of the field had him involved. The long ball to gila and then d'ago was his as well. 7
zanetti - average and slow moving forward, but fairly solid in a holding role. whiffed on a wide open shot that led to a dangerous counter 5.5
vargas - until his ejection, Vargas was the best player on the field. time and time again he charged past Napoli players. Possessed by the spirit of melo and ejected. 7
D'agostino - invisible in the first half of the first half, got better with linking passes and held the ball against napoli pressure well. second half, scored the equalizer before being subbed for Circi; 7
Circi took a few free kicks but really wasn't very involved. N/A
Marchionni - in the first half lots of possession, lots of charging at people, lots of crossing the ball to no one or out of bounds, hilight was a bicycle kick on goal, but saved. more of the same in the second half. 6
Gila - lots and lots of hard ass work and one moment of glory. getting dragged down in the box twice and serving the ball elegantly to D'Ago for the goal. subbed for babacar. 7
Babacar - not enough time to be a factor. n/a

Moving Forward
Next week is an International Week as players go off to fulfill their duties to their countries. Vargas going off to the other side of the world is no big deal now, as he's not playing the next serie a match,but it does mean some tweaking for Mr Mihaj. Expect some PT for Ljajic.

Next Match is the first Serie A match in Lecce for a while and the locals should be feverish. Probably won't be a huge viola supporter presence due to the distance and the Spectator Card fiasco which decimated attendence in some areas this weekend.

The mercato ends tuesday and the only expected moves from Mr Corvino now are those of subtraction rather than addition. Both Papa Waigo and Avramov are expected to be loaned or sold. more on that to come, I'm sure.

In Closing
one point is better than none, but not as good as three. I'll take it.
Forza Viola