Oh Its the Most Wonderful Time of the Year- Fiorentina vs. FC Hollywood

Share All sharing options for: Oh Its the Most Wonderful Time of the Year- Fiorentina vs. FC Hollywood 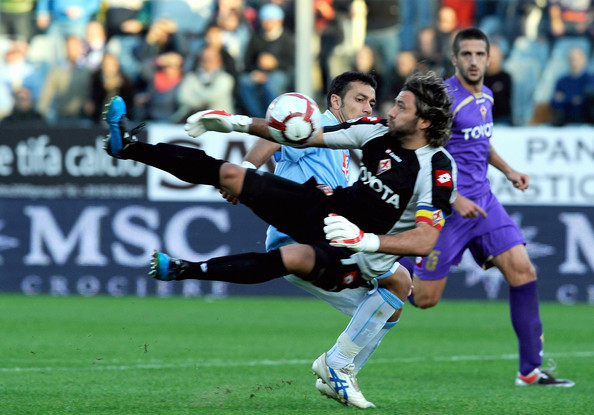 Ladies and gentleman the day is here. The first game of the season, time to stop the speculation and the maybes and get down to the real deal. Its time to start our season and start it right. Our first match will be at home against the Southerners from Napoli.

Our first match is a tricky one, Napoli have had a decent transfer season, sending Denis off to Udinese and bringing in Palermo's Urugayan striker (and frequent Viola scorer) Edison Cavani. The good news for us is the latest news that Fab Quags is supposedly packing his bags for Turin which might go through in the next few hours. Other than that the team is flying up to the far reaches of Sweden to face Elfsborg (Fun fact: Fiorentina-Elfsborg was played in Florence in 2007 and finished 6-1 for the purple people in the UEFA Cup stages) So heres to hoping they get a nice extra time and penalties to mull over. In light of this expect a mini-turnover and Mazzari might be benching key players, instead deciding to play Cavani up front with his new "superstar" (I really can't say that seriously) Cristiano Lucarelli. Last season we played a brave game holding up a great defense and Frey was absolutely spectacular, even blocking a penalty, but we fell to the curse of the ex in the 90th minute when a moment of lapse from our back 4 let Maggio slot it in and take the 1-0 win back south.

So this game comes on the heels of the war of words between Aurelio De Laurentis (famously the producer of some pretty forgettable films) And our recently "finally found a pair" kinda sorta president Andrea Della Valle. De Laurentis commented on his beating Fiorentina to the punch for football god Christiano Lucarelli commenting, "Christiano prefered Napoli because in blue you win and in purple you lose." ADV immediately put out this statement "I expect Napoli and its administration to show the same kind of respect four our team and city as we would for them."

On to the good guys, the formation (minus Boruc) will look about the same to what we saw in the first half against Valencia. Spiderman Frey won his spot over Boruc, our back line should consist of LDS, Christmas, Kroldmonster, and Sad Puppy Eyes (Pasqual) our mid should be Ricky Monty, Zanetti (still needs a nickname) and D'ago. Up front we should see Marchionni, the Peruvian Warrior, and Gila Monster. Expect a 4-2-3-1 formation. New boy Alessio Cerci will most likely start from the bench, but should be subbed in at some point in Marchionni's place.

For the bad guys expect De Sanctis (aka Mr. Pass a ball directly to JoJo) then a defense of Grava, Cannavaro and Aronica, followed by Maggio and Dossena, Gargano, Ex-Man Pazienza, and Lucarelli and Cavani up front.

On a word of note, On August 26th 1926 the society ACF Fiorentina Calcio was officially founded, so happy 84 years of purple!!

This season i'm taking out the score predictions for superstitious reasons, you are free to discuss among yourselves though!