Share All sharing options for: Fiorentina Boards the Coaching Carousel 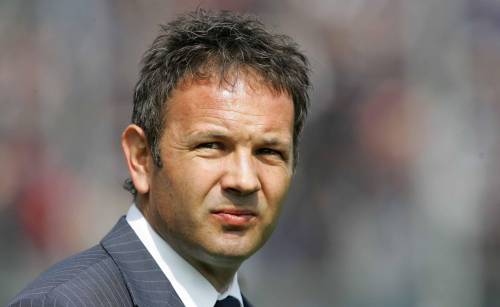 Sorry about the lack of timely Season Review. I promise its coming. Unfortunately, the majority of time I've spent on it has been in Excel. It'll be different, but I think you guys will like it.

The big news is that Prandelli is almost definitely gone, with Siniša Mihajlović (Serbian Cyrillic: Синиша Михајловић) probably replacing him. I shall henceforth refer to him as Sinisa Mihajlovic sans accents/umlauts/doppelgangers. I shall try not to refer to him as Miha, because that makes me think of the Spanish "mi hija" and Sinisa is most definitely not my daughter. I digress. The important thing to take from this, is that Sinisa is a BIG change. His personality on the pitch is very, very different than Prandelli's. Tactically, he favors the 4-3-3. This is good for Montolivo and bad for Marchionni. I don't know enough about how his particular system works, so thats all I can venture to say on that matter. He's also the bomb at free kicks, one of the best ever. Ibra credits him for his free kick ability. Remember that bullet he unleashed on us last year? Yea, I want that. Also, if you check out youtube videos of Sinisa's free kicks, you will see that they go up high, then drop down really fast. Thats because of the insane amount of top spin he put on them. If he can teach Montolivo how to do that, maybe he will stop blasting everything into the stratosphere.

As for Prandelli leaving, I didn't want to see it happen, but I think its for the best. The National Team is the best place for him to move to, in terms of maintaining the peace in Firenze. Last summer our fans in the city flipped out when Felipe Melo left for Juventus. Can you imagine what they would do if Prandelli followed him?

We drew Montreal Impact 1-1, with Seferovic scoring. Sebi and Firefly went to that game. Sebi, if you send me those pictures you have with the team, I will gladly put them up. Firefly thought we weren't taking it too seriously. At least we didn't embarrass ourselves like Juventus did against some scrub MLS team. Speaking of Juventus, we beat them 1-0, thanks to Jovetic. Alessio attended that game, and was impressed by Jovetic and Babacar, confirming what we suspected: they are both going to rule Italy some day soon. I can't wait.

Summer Mercato opens July 1st. According to the Slakas Scoop, Corvino is going to pick up a midfielder first. Guesses anyone? My guess is former President of the United States, Bill Clinton. Because I've given up seriously trying to figure out the mind of Corvino.