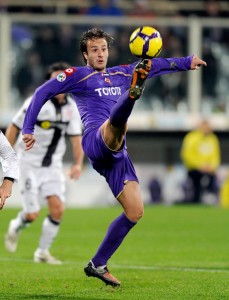 The weekly massive Serie A match has arrived. This one is away to Parma, a short trip but a difficult opponent. Parma started off like a house of fire, but due to many factors, not least of which being that they relied on a lot of aging veterans, they've fallen down to the bottom half of the table. They sit in 11th, on 42 points, only 2 points behind 8th-placed Fiorentina. Parma have also been solid at home, with 9 wins, 3 losses and 3 draws.

The fact that the table is bunched so close together is a double edged sword for Fiorentina. On the positive side, it means that the European places are within reach with 7 matches to go. On the negative side, Parma will not be resting on their collective laurels having achieved the goal of avoiding relegation. If the gialloblu can string a few wins together, they too can reach Europeans places. So, this means that Fiorentina are in for a difficult match indeed.

We've gone over all the Parma connections in the past, but suffice to say that this is a special trip for Gila, Prandelli and Donadel at the very least. For Parma, ex-Viola man (even though C4 glosses over this) Bojinov must be keeping Prandelli up at night. The Viola lost the first match this season 3-2 at home, largely due to Parma exploiting the Viola's slow defense that day of Commotto-Dainelli-Natali-Pasqual. I expect Prandelli to do his best to counter that with an emphasis on maintaining possession and doing the best he can to get some speed out there, even though Gobbi's out with a card suspension. I was always a big fan of Bojinov and am happy to see him doing well after so many injuries and the fact that he wasn't a big enough name got in the way of his making a name for himself at Manchester City. But, please Valeri, no goals tomorrow, ok?

For the Viola, this has been described as a 4-4-1-1 with Jo-Jo, since he maybe plays a bit further than others who have been in the middle of the 4-2-3-1. Either way, I don't think the shape has changed all that much.

Not looking good. Match kicks off at 9am EST tomorrow morning, on accounta Jesus. We'll do the stream thing.

I think the Viola get it done, and FINALLY shut somebody out. 2-0 with RickyMonty and Jo-Jo doing the damage. Forza Viola and I hope everyone else is enjoying some beautiful spring weather like we have here in DC.